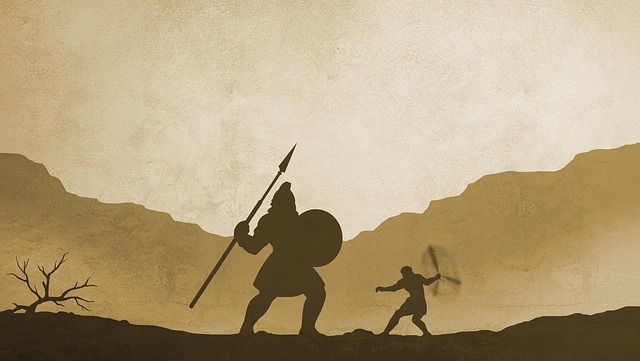 In the history of many states and people, there are cases when force in opposition was not always the decisive factor. This situation was not spared by the people of Israel either. Moreover, the Jews had perhaps the most significant case. This is the well-known battle between the Jewish youth David and the Philistine Goliath.

After the Jews settled in Canaan, dividing its lands between 12 tribes, they had to regularly defend their right to these territories. Taking advantage of the fact that a single Jewish state did not exist for some time, there were many hunters to grab a fraction of the wealth from someone else's table. Almost all the people surrounding the lands of Israel, at least once, tried to go to war against the Jews. And all of them had to be "admonished" by force of arms.

Perhaps the most powerful and constant enemies of the Jews were the Philistines, who can be compared with the Vikings, who only operated in the ancient period and the Mediterranean. They first appeared during the period when the Jews lived in Egypt. For the fact that the troops of the Philistines have always attacked countries from the sea, they received the nickname "the peoples of the sea." They could build ships, knew how to process iron, make excellent armor and weapons.

By the time of the Exodus of the Jews from Egyptian slavery, the Philistines had their territory in Canaan for several decades. Having seized five cities, they organized a union state from them, from where they constantly raided their neighbors. After their appearance in Canaan, the Jews had to experience many unpleasant moments in such a neighborhood. Their wars with the Philistines flared up with enviable constancy and were far from being victorious. This went on for 350 years.

The situation in Israel

As already mentioned, for some time there was no unified leadership in the country. The allotments allocated to the tribes of Israel were ruled by their own leaders, whose mentors and ideologists were the so-called judges, therefore this period is called the Age of Judges. But this fragmentation made it difficult to repel the attacks of external enemies. The high priest Samuel, who became the last of the judges, concluded that only a sole ruler, leading a single state, could change the situation.

Samuel's choice fell on the son of a simple farmer Saul, a native of the tribe of Benjamin, who really was able to unite the people of Israel. Under his leadership, the Jews were able to repel several attacks by enemy troops. However, it soon became clear that Saul did not fully correspond to the ideals of a king that Samuel envisioned. And then the high priest began to look for a replacement for him. As often happens, the clue came from heaven: the voice of God pointed out to Samuel the unknown son of the shepherd David from the tribe of Judah, who lived in Bethlehem.

The young man was secretly anointed to the kingdom, but for the time being, he was ordered not to give out his status. It so happened that Saul developed a mental illness. The King fell into melancholy, and only music for some time distracted the sovereign from his experiences. Since David played the harp well, at the request of Samuel, he went to the capital and was introduced into the royal circle as a musician. Perhaps David would have had to wait a long time for the opportunity to become king, but external forces intervened in the situation.

The faith of a young musician

The Philistines, having collected significant forces, set out on a campaign against Israel. The Israelites went out to meet the enemies and stopped the enemy. The faith of the country could be decided by a general battle, but neither side dared to attack. From the times of antiquity, and until the end of the Middle Ages, in several cases, instead of a battle of armies, a duel of the strongest warriors was appointed. The best fighter was chosen from each opposing side, and in the course of their duel, the outcome of the battle was decided.

The Philistines put out their fighter. He turned out to be, almost, a three-meter giant Goliath, possessing tremendous strength, and very skillfully wielding weapons. The warrior's capabilities were supplemented by almost 60-kilogram armor, which almost completely covered Goliath's body from being hit by someone else's weapon. Unfortunately, there was no warrior of this level on the part of the Jews. The pause in the war dragged on.

Every day, the opposing sides went out into the field, built battle formations, and stood. Goliath stepped forward and challenged the Jewish warrior to a duel. But since no one came to him, the giant, challenging him, walked along with the ranks of the Israelites and scoffed at them, declaring them cowards. The situation had to be somehow resolved, and then Saul announced that the warrior who defeated Goliath would receive a royal daughter as his wife. But even such a serious proposal did not inspire the feat of the Jewish fighters.

It so happened that one day David came to the army. The young musician went there to see his brothers mobilized for the war. It was then that he witnessed an invitation to a duel, shameful for the Jews. The young man was indignant and decided to accept the enemy's challenge. The delighted king offered the daredevil weapon and armor, but he refused to take them. Such things to him, a musician and the son of a shepherd, in a battle against a well-trained and strong warrior, would become just a burden. It was not strength that was required here, but intelligence. It was the young daredevil who decided to use it.

He went out to the duel, dressed in ordinary clothes. Of all that could be considered a weapon, David captured only a sling, launching stones from which he chased the wolves at the time when he helped herd sheep. But on the other hand, he mastered this throwing weapon perfectly. In addition, with him, David did not need to approach a well-prepared enemy.

Goliath, amazed at the appearance of such an unusual character, shouted to David: "Why did you come out against me with a stick as if driving a dog away?" these were the last words in the life of the giant. David answered him that he was a perfectly armed warrior, taking only the name of God in the form of a weapon, and now, with the help of the Almighty, he would kill the enemy who reviled God's name. After such a short speech, David put a stone in the sling and threw it at Goliath.

Perhaps if the Philistine had been less massive and more agile, he could have dodged the stone. But the Goliath, clad in copper armor, could only stubbornly move forward, destroying everything around him. In this case, it played a cruel joke on him. Skillful slinger David so accurately launched the "projectile" that it hit the giant's only place unprotected by armor - in the forehead. A weighty stone hit the enemy with such force that he instantly lost consciousness and fell to the ground. David immediately rushed to the defeated enemy, took the sword that had fallen from Goliath's hand, and cut off his head.

DAVID VS GOLIATH CONSEQUENCES OF THE BATTLE

The battle was decided. The Philistines retreated, and Saul had no choice but to marry his youngest daughter Michal to the hero, thereby introducing David into the circle of heirs to the throne. Then the king, of course, tried to eliminate the dangerous rival, but all his attempts to kill him were in vain. Later, David became king of Israel, moved the capital to Jerusalem, where his son Solomon built the First Temple. And Jesus Christ became a distant descendant of the legendary king-hero hundreds of years later.

VISIT THE TOMB OF KING DAVID IN JERUSALEM