It is more correct to call the Blessed Fire - Blessed light or radiance, but in Russian, unlike Greek or Armenian, this name is firmly entrenched.

Where does the tradition of the Holy Fire come from?is it "Jerusalem Syndrome"? Is the Holy Fire Mentioned in the Gospels? No, it is not mentioned, although all believing Christians understand that this fire or radiance is associated with the Resurrection of Christ.

The tradition of the Holy Light has been known since before the Crusades to the East, and it was first described in the 9th century AD chronicles. The Byzantine Greeks spoke about the spontaneous igniting of fire in oil lamps at Christ's tomb on Holy Saturday before the Lord's Easter. This miracle was interpreted by Christians as Christ's victory over death, the resurrection from the dead, and confirmation of the Christian Church's triumph over the world of other nations and religions.

Several centuries ago, the present ritual of taking fire was founded in Turkish times. Representatives from the Greek Orthodox, Armenian Gregorian, and Oriental churches take part in a unique ritual to accept the Holy Fire, which lights up inside Christ's tomb and is a well-known Jerusalem miracle.
This is a wonderful and happy celebration for Jerusalem's Christians, which even outweighs the night Easter Liturgy with the iconic exclamations "Christ has Risen!" "-" He has indeed risen! “.

The blessed fire of Jerusalem pervades the Orthodox world.
The main souvenir of the Jerusalem traveler is a candle burned from the Holy Fire.

And no one has ever addressed the age-old question of how the Holy Fire, a symbol of Christ's resurrection, lights up.

Jerusalem is the Center of the World 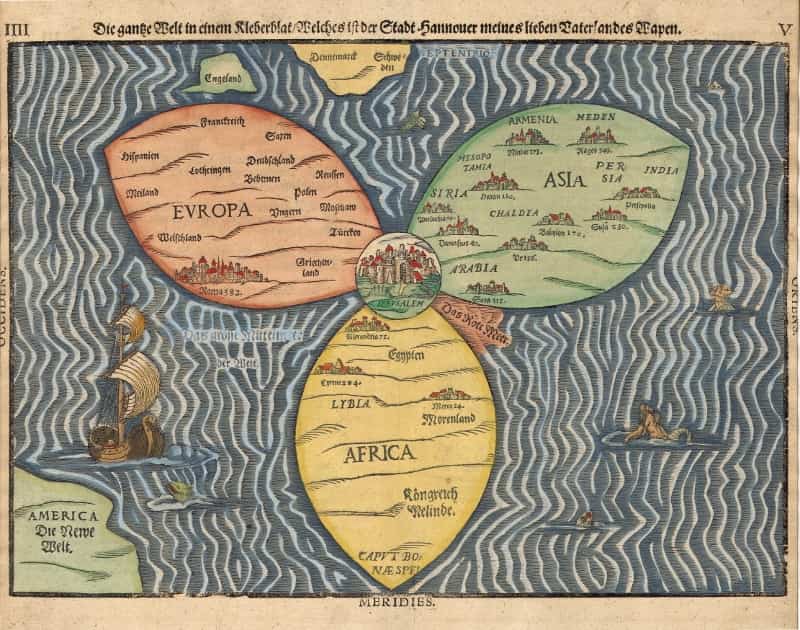 Unlike the vast majority of cities, Jerusalem has never been merely a center of craft and trade.

Since ancient times, generations of people have considered the city as a spiritual center, where first sacrifices were offered to pagan gods and eventually monotheist temples developed.

The concept of Jerusalem as the center of the globe arose a long time ago. And the point here isn't just that the Holy Land and the city of Jerusalem were on one of antiquity's most vital trade routes, connecting three continents - Europe, Asia, and Africa. The special holiness of Jerusalem, as well as the city's link to the Creator and the prophets: Jewish, Christian, and Muslim, have always piqued the interest of visitors.

The famous trefoil map, made by Heinrich Banting in Hanover in 1581, lies in front of us. Jerusalem was placed in the center of the map by the medieval cartographer. Surprisingly, the newly found America is also portrayed here.

The ceramic replica of the map is on display near the city hall in the heart of modern Jerusalem.
The map was created in the ancient traditional Jerusalem manner by modern Armenian ceramists led by Arman Darian.

Was the map's medieval author aware of the map's deep symbolic meaning? Yes, I believe so!
It's been 400 years. The map's meaning has not changed.
For a Jew, this card represents Jerusalem's unique position as the center of the world, as well as the connection to the places of the diaspora where Jews have lived and continue to reside, including America.

The designation of Jerusalem as the spiritual center of the world elevates the status of modern Jerusalem, the capital of the state of Israel, and draws millions of Jewish, Christian, and Muslim pilgrims and visitors each year.

"The Flood was God's punishment for people for the evil they did.
Only righteous Noah and his family were saved, as well as animals and birds, which God ordered to take Noah with him to the ark.
And when the flood ended and the water began to decrease, Noah sent a dove and the dove returned to the ark and did not find land.
Noah waited another 7 days ... "

"and again he sent the dove out of the ark.
And a dove appeared to him in the evening; and, behold, the plucked olive leaf was seized by his beak:
and Noah knew that the water on the earth had dropped. "

Interestingly, a later Jewish tradition claims that the dove brought Noah an olive branch from the Temple Mount, and a temple for the Creator was built on this site in the future Jerusalem.

In Hebrew, the dove "Yona", there is also the biblical prophet Yona, and the male name Yona is found in our people.
The meaning of the name Yona is meek, obedient, darling!

If you are in Jerusalem, then I can show you the dove of peace.

This is a small bird that is not very afraid of people and can allow a person to approach a distance of 1-2 steps.
The bird in Israel is called yona, and in Russian - the little turtledove. In our area, it is common. A turtledove lives next to people. Builds nests and hatches chicks on trees, roofs, and balconies of houses. You may be lucky and you will see a turtle dove with a twig in its beak. The bird builds a nest from such twigs.

Gospel olive in the Garden of Gethsemane

The navel of the Earth looks like this - it is a vase of red-brown stone in the upper part of which a symbolic cross is depicted. A keen observer can easily see the date - 1839, traced based on the center of the Earth.
Without a doubt, the present navel of the Earth was made after the fire in the Church of the Sepulcher in 1808.

Orthodox Greeks do not respect the center of the Christian world with great respect - it is constantly being moved - which can be reflected in the balance of the earthly world order. The true place of the navel of the Earth is exactly under the small dome of the temple, under the image of the Savior. But the center of the Earth had to be moved 2-3 meters because of the carpet, which is rolled out several times a day during the Greek service, and there is not enough space for the carpet! But during the light week, the navel is generally removed under the stairs of the catalog choirs for a whole week. These days in the temple many pilgrims from all over the world came to ask for the blessing of the Greek Orthodox Patriarch Jerusalem and the navel of the Earth probably interferes with believers, because next to the center of the world there is also a box for donations, and a large bronze candlestick, and a box for candle stubs. But the bright week passes and the navel of the Earth with all the accessories is returned to its place again.

The Navel of the Earth appeared in the Temple of the Sepulcher in time immemorial. The first mentions of him are known from the beginning of the 11th century, before the arrival of the crusaders to the Holy Land. In the temple restored by the Byzantine emperor Constantine Monomakh, the navel of the Earth is mentioned, which was located in the same place as today - in the middle between the tomb of Christ and the Greek altar. What did he look like?

A copy of the center of the Christian world can be seen in Russia, in the village of Bogolyubovo, Vladimir Region, in the Church of the Most Holy Theotokos.

Russian archaeologists dug up in the lower tiers of the temple something similar to the base of a column, wherein the upper part I was able to discern the outlines of the Jerusalem pilgrim's cross, which is a symbol of the Catholic Franciscan order, so familiar to us. There are four Jerusalem crosses, no other images or traces of stone carving are visible. The stone is white, local limestone. This white stone is passed off in Bogolyubovo for the navel of the Earth.
Why do I think this is a copy of the original in the Church of the Holy Sepulcher during the Crusades?

There are legends that the pious old Russian prince Andrei named Bogolyubsky either was a participant in the crusades himself, or he sent his sons with part of a squad of soldiers, but the Russians saw the Jerusalem temple and the navel of the Earth and copied it in their country. The installation of the center of the Christian world in the Vladimir land as opposed to Kyiv was very symbolic, Prince Andrew wants to raise the status of the new center of Russian statehood.

Another navel of the Earth in Russia can be seen in the Moscow region in New Jerusalem. Its appearance is associated with Patriarch Nikon, who in the 17th century conceived to make a conditional, and sometimes an exact copy of the Holy Jerusalem in Russia. New Jerusalem was perceived as the center of the Russian Orthodox world of its time.
The original for Nikon was the navel of the Earth in the Church of the Sepulcher before the fire of 1808. Now, after the restoration, he again appeared in the temple.