WHAT IS THE SYMBOL OF ISRAEL?

THE SYMBOL OF ISRAEL- HISTORY, AND SECRETS 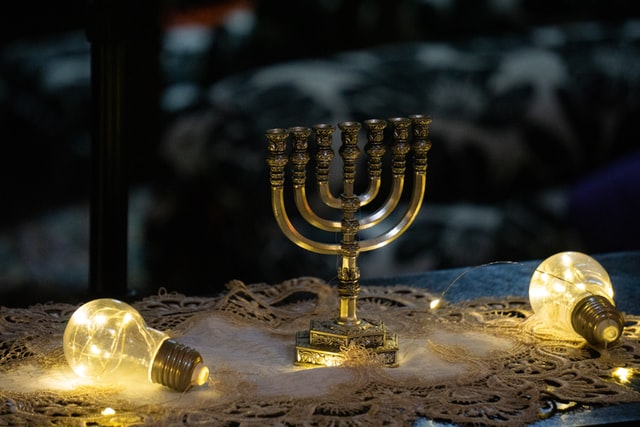 On February 10, 1949, the country's symbol was officially introduced in the newly formed state of Israel. It was a blue shield with a seven-branched menorah lamp depicted on it, the base of which is masonry. The menorah is flanked by two olive branches. After the symbol of Israel was officially presented to the general public, the country was able to start printing its passports and other documents of title. Before that, residents of the revived state had to use the documents of Great Britain, which caused legitimate criticism from its citizens.

All symbols inscribed on the Jewish symbol bear deep symbolism associated with the most important historical events, both of the Jews themselves and their statehood. Its central symbol is the menorah - a beautiful seven-century lamp made of gold taken by the Jews from Egypt and kept in the Tabernacle of the Assembly. Later, when the Jerusalem Temple was built, this menorah was transferred there and preserved in it for many centuries. The lamp managed to miraculously survive after the destruction of the First Temple and survive safely until the end of the first Jewish state during the period of Roman rule.

The menorah is based on masonry - a kind of symbolic image of the triumphal arch, erected in honor of the Roman commander Flavius ​​Titus. It was he who was able to pacify the rebellious Jews, destroyed the main symbol of the Jews, the Second Temple, and for many centuries the first Jewish state ceased to exist. Hundreds of thousands of people were killed or taken into slavery in the central regions of the metropolis. When Flavius ​​Titus triumphantly entered Rome, the Jewish captives walking after him carried a lamp taken by the conquerors from the Second Temple destroyed by them. This historical moment is depicted on the stones of the Triumphal Arch of Titus.

Olive branches are located on both sides of the menorah. They take their origin from the inscription "Israel", made in Hebrew. This plant has been cultivated for thousands of years by the peoples of Southern Europe and the Middle East, being a symbol of wealth, peace, and tranquility. Olive branches for use in Israel's symbol were adopted as a sign that the reborn Jewish state wants to live peacefully with all of its neighbors, regardless of the difference in religion.

The background of the state emblem is blue, which does not change under any circumstances, unlike menorah and olive branches, which can have two options: white (as on the presidential flag), golden (in other cases).

The history of the creation of this emblem is also of interest. It began immediately after Israel was declared a state. The newly formed country needed state symbols, without which no territorial entity can be considered complete. For this reason, immediately after the declaration of Israel's independence, a competition was announced. Professional artists and art lovers were invited to create their version of the state emblem. The main condition of the competition was the use of the image of the menorah - a traditional symbol of Judaism.

Other elements were left to the mercy of artists, however, taking into account the national characteristics of the Jewish nation. As a result, the members of the provisional Council of the country were presented for consideration hundreds of versions of the coats of arms, many of which had a rather exotic look; however, none of them satisfied the high commission, and all of them were rejected. In the future, work on the symbol was offered to continue to two artists, leading specialists of that period in the field of advertising design and political posters, Maxim and Gabriel Sheftelovich-Shapiro.

The brothers were born in the Baltic city of Libava (now the Latvian Liepaja), then belonged to the Russian Empire, respectively in 1909 and 1910. After reaching adulthood, they moved to Germany in the late 1920s, where they began to study painting in Berlin. After graduation, Maxim returned to Latvia, where he settled in its capital Riga. Gabriel went to Stockholm for two years, and then returned to his homeland.

However, they did not stay in Latvia for long. In 1935, both brothers, having acquired their own families by that time, moved to Palestine. By a happy coincidence, it was this decision that saved their lives, because after just a few years all their relatives who remained in Latvia were destroyed by German and Latvian Nazis. In Palestine, the brothers settled in Tel Aviv, where the Shamirov Brothers Studio was founded on the famous Rothschild Boulevard. Gradually, they managed to acquire a name and respect in the professional environment, so they began to turn to artists with serious and responsible orders.

It is not surprising that after the negative result of the competition for the design of the symbol of the State of Israel, the country's leadership turned to them for help. The brothers were given certain recommendations on the project, which the artists had to take into account in the process of work. One of them, personally proposed by the first President of the country, Chaim Weizmann, concerned the appearance of olive branches on the symbol. Soon the brothers proposed their version, but even the work of such venerable specialists did not completely satisfy the customers.

The members of the commission found Shamirov's version too modernist. They wanted to see something more traditional. As a result, the artists redesigned the project, making the required changes, in particular, adding a stylized image of the Arch of Titus in Rome. The members of the commission believed that the symbol of national shame shown on the triumphal arch on the Israeli symbol should turn into a sign of pride for the Jewish people. In the end, it turned out that way.

Now it has become prestigious to be a citizen of Israel, first of all, thanks to the balanced domestic and foreign policy of the state, as well as its economic and scientific power. Despite the insignificant size of the country itself, the leaders of the most powerful world powers conduct dialogues with its politicians on equal terms, and dozens of countries of the planet try to maintain stable business relations.

DISCOVER THE HISTORY OF ISRAEL DURING YOUR PRIVATE TOURS IN ISRAEL