the Christian churches in Israel are under heavy reconstruction!

NO TOURISTS IN THE COUNTRY? THE CHRISTIAN CHURCHES IN ISRAEL ARE UNDER HEAVY RECONSTRUCTION!

While Israel is closed to tourists and pilgrims from abroad since march 15 2020, the most important and famous churches to Christians undergo a facelift. For the benefit of the crowds of visitors waiting for the moment when the sky will open once again. the head of the catholic convention in charge of the Vatican in Israel: "the pilgrims hope to return quickly"

For more than half a year, the Israeli sky has been closed to hundreds of thousands of tourists from abroad, leaving dozens of important churches in Israel with almost no visitors. In the holy places of Christianity in the Holy Land on behalf of the Vatican, the Custodia Terra Santa(Holy Christian organization supervising the holy sites in Israel), the Guardians of the holy places in the Holy Land on behalf of the Vatican, decided to see the full half of the cup and to advance in recent months an acceleration program for the preservation and renovation of churches and the most important sites for Christianity in Israel.

In the days of the routine renovation of the sites and churches is a long and complex process, due to the large number of visitors who visit the sites throughout the year. In July last year, about 350 thousand tourists from around the world arrived in Israel, while this year the sky is closed to travelers and pilgrims. These works in the summer months enable accelerated progress due to the comfortable climate and uninterrupted operation. As part of the work, many churches undergo a unique conservation process corresponding to the ancient and spectacular structures that characterize the churches.

AMONG THE IMPORTANT CHURCHES OF ISRAEL

The Transfiguration Church- is being renovated on Mount Tabor, where according to the Christian faith the event in which Jesus spoke with Moses and Elijah and confirmed his status as the son of God; 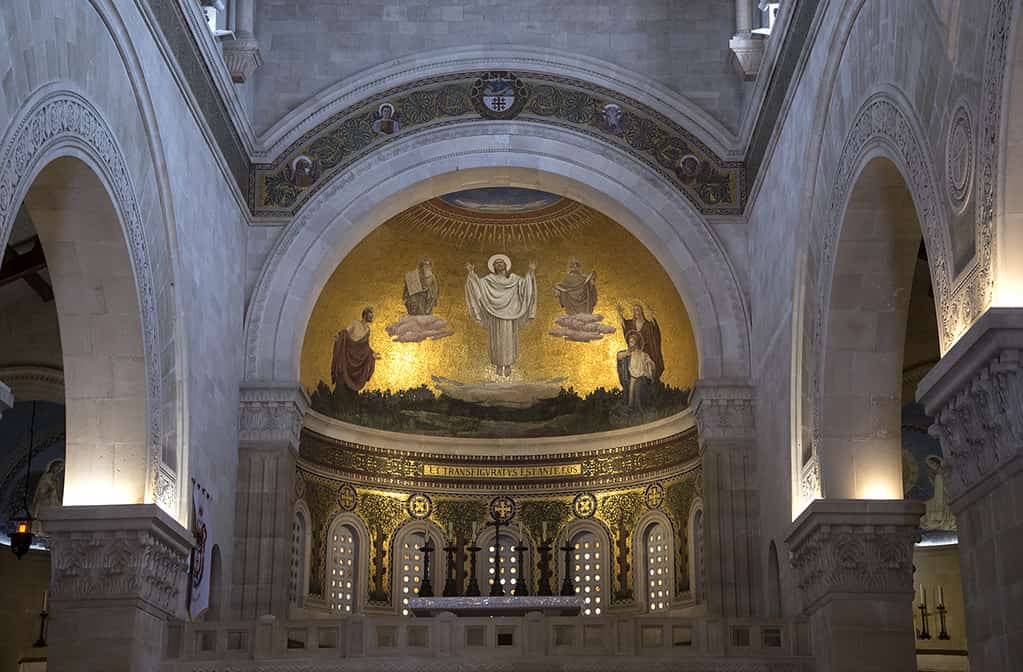 The current church was built from 1921 to 1925 according to the plans of Italian architects Antonio and guys Berllucci. In the design of the building, the architects took into account references to the structure of the church from the Byzantine period standing on the mountain. On the facade of the church are two towers connected by a magnificent Gable. Inside each of the towers are chapels (to the right in honor of Moses and the left in honor of Elijah the Prophet).

In the center of the entrance (APSE), there is a mosaic depicting the story of the "Transfiguration". Below the structure is the crypt to which 12 steps descend. Here you can see the foundations of the early Byzantine church as well as inside the floor, under the wooden doors, the monks show the rock that, according to their tradition, Jesus stood on him in the hour of "Transfiguration".

Outside the church, you can see additional buildings that include a toilet structure as well as a small museum documenting the artifacts collected during excavations and various construction operations.

The Church of grief (all nations) in Gethsemane in the Kidron stream - where according to the Christian faith Jesus prayed and tormented before being Pilate and the Roman soldiers;

The Church of All Nations stands on the Mount of Olives in Jerusalem alongside the Garden of Gethsemane facing the walls of the Old City. The church commemorates the site where Jesus prayed on the eve of his crucifixion. The modern church stands out among the other churches on the Mt. of Olives thanks to the stunning mosaic that adorns the façade. 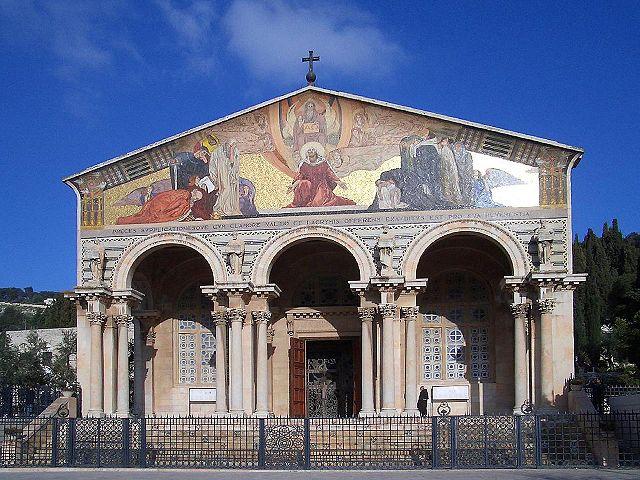 HISTORY OF THE CHURCH OF ALL NATIONS

The church was constructed during the 4th century on the byzantine period, destroyed by the Persians during the 6th century, and built again during the 12th century. the church was founded by 12 big nations who donated and financed the construction and ever since the church called the “Church of All Nations.” However, the most common name is the Basilica of the Agony. The Roman Catholic church was designed by Antonio Barluzzi one of the greatest architects of the holy land and completed in 1924.

The garden surrounding the church has many olive trees planted almost 2000 years ago and according to the tradition they witnessed the bitrate of Jesus by judas.there are a few trees even older than the most and they are supported by stones holding them from falling apart.

the inner part of the church has an amazing old mosaic floor covered from the 6th century, there are a few places where you can actually see the original part!all the rest remained from the last construction since the 20 century.
Features of the Church of All Nations
The Church of All Nations has a roof of twelve copulas giving it a bubble-like appearance and the style is neo-classic.

the colors inside are purple and blue and you can barely see natural light coming in, the whole idea is to give the visitors the feeling of the last moments of Jesus, agony, sorrow, and night.

The inner-side of the twelve cupolas is adorned with the coat-of-arms of the countries that contributed to the cost of construction. The church interior is divided into three aisles that lead to three apses. Mosaics illustrating Biblical scenes that took place in the Garden of Gethsemane cover the walls of the church and were paid for by each of the contributing nations. The interior is kept dark and solemn by violet-blue alabaster windows to emphasize Christ’s anguish. Beneath the altar is a rock believed to be where Jesus sat as prayed (Matthew 26:36 and Mark 14:32-42). In the church garden, there is an open-air altar used by several Christian denominations for prayer services and ceremonies.
the Church of the shepherd's field - commemorating the place where according to faith the angel was revealed to the shepherds and foreshadowed the birth of Christ.

The custodian Father Francesco Patton, Head of the custodian terra Santa, keeps the holy places for Christianity in the Holy Land: "every year in the summer months many pilgrims and believers come to Israel to visit the holy sites. This year the corona epidemic and the minority of visitors, we started the renovation work of the vaulted churches and the spectacular sites, to preserve them in the hope that the believers will soon return. We will do everything to keep visitors healthy and follow all the guidelines of the Ministry of Health to allow the masses to arrive and visit these important sites."

By the end of September, we are expecting to come back to normal, visiting the church of all nations will be possible on my daily tours in Israel real soon.