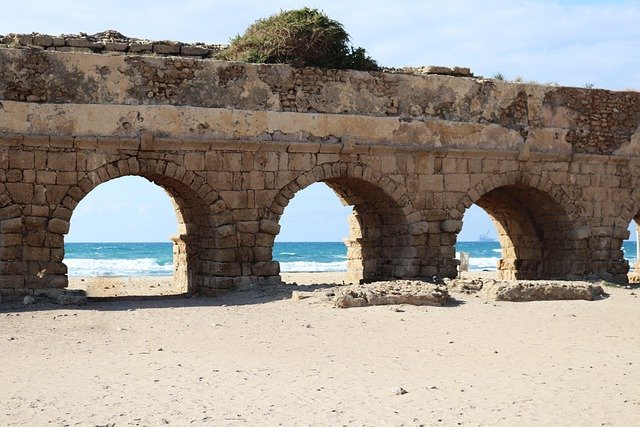 So, I walk with tourists along the aqueduct of Caesarea. Time-eaten, spongy, but perfectly preserved in sandstone. For two thousand years, it was fluttered by winds and bad weather, salt spray and sharp grains of sand tried to destroy it, but only tore off the outer plaster, exposing and emphasizing the natural beauty of this stone. We see that the sandstone blocks are held together by the famous Roman cement mixed with the Neapolitan volcanic ash "pozzolana".

And this cement has not lost its strength to this day. Don't believe me? Poke around with a clove - you will see that it is still very strong. It was the Romans who came up with the idea of ​​adding volcanic ash to cement. Such cement is excellent for structures in constant contact with water. Herod brought the pozzolan from the Gulf of Naples nearly a thousand kilometers away and used it mainly to fill the blocks that made up the breakwaters and breakwaters of the port.

But there was enough for the aqueduct. Pozzolan was added to the plaster as well. Plastered outside and inside. Outside - to protect the sandstone from weathering. But the internal plaster has a completely different purpose. First, it is needed to waterproof the tray through which the water flows to prevent it from leaking. And, secondly, for "smoothing" the inner surface of this tray. The fact is that Roman technologies made it possible to conduct water with a scanty slope - 1 meter of slope per 1 km of an aqueduct. (Today, such slopes on lines where fluid flows by gravity are impracticable). Therefore, the internal plaster had to be brought to a perfectly even and smooth state so that the water flowed through it easily and naturally, without breakers and eddies. Thus, the highest quality finish of the aqueduct ensured its smooth operation.

The aqueduct of Caesarea originated in the spurs of the low Carmel northeast of Caesarea, in the limestone mountains. The builders needed water sources that were high enough to build a sloped aqueduct. And they created them. Horizontal channels were pierced tens of meters deep into the mountain. These channels collected water that oozed through the layered limestone, saturated with rainwater, and led an already full-flowing stream out of the mountain's belly. Today, the place where the stream exits are called Shuni. This is where this Roman aqueduct originates, the very first in Judea.

I dare to suggest that this very first aqueduct in Judea was nevertheless built on the initiative of the great king. This is very much in line with its scope. Well, Herod could not build a magnificent new city and not equip it with a tremendous amount of water, leave it without fountains, baths, public toilets. So I am sure that the laying of the water conduit was started by order of Herod.

Water passing through limestone always comes out "hard", calcium salts are dissolved in it. This water hardness is very harmful to water pipelines. Look closely at the outer wall of the aqueduct. Do you see the growth in it? It looks like a tree mushroom - a burl. Only this mushroom is stone. And this stone is called travertine. The same stone that makes up the scale in the teapot. Or stalactites and stalagmites in karst caves.

These growths form on ancient aqueducts when a crack appears in the dense internal plaster, and it has not been repaired for years. The water seeps out, runs down the wall, drips down, slowly evaporates. And salts are gradually deposited on the wall of the water conduit. Day after day. Year after year. Century after century. Imagine how many years it was necessary to use this water conduit without repairing it so that SUCH mushrooms would grow on its walls!

Travertine is generally an extremely interesting mineral. Chemically, it is indistinguishable from marble and limestone. But its origin is always associated with flowing water. There are even travertine deposits of industrial importance in the world. The most famous structure erected from this stone is the Roman Colosseum.

So, this very travertine is the scourge of aqueducts. Over the centuries of their work, travertine grows on the inner walls of the trays and narrows their cross-section, greatly reducing the productivity of the water conduits. The history of the famous Eifel Aqueduct, which supplied water to Cologne for a very short time in the 2nd century AD, is indicative. and destroyed already in the III century. Water continued to flow in it for centuries, only not into the city, but the destroyed place. And travertine naturally grew on the inner walls of the existing section of the water conduit.

After many centuries, the aqueduct was rediscovered and began to use this travertine for the manufacture of columns and cladding of altars. Polished Eifel Travertine is extraordinarily beautiful - chocolate brown with white veins. 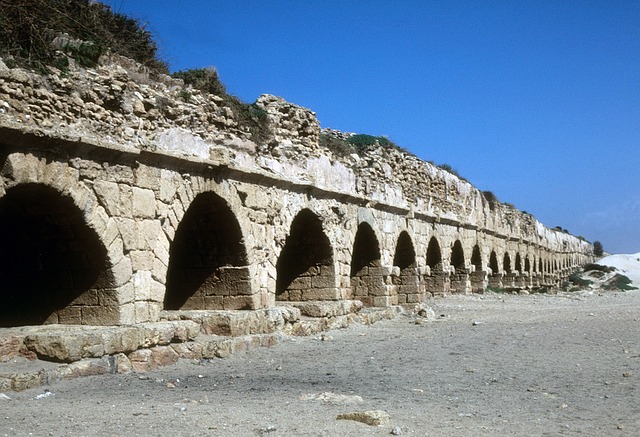 We return to the history of the Caesarea waterways. Over the centuries, the internal section of the Herod's water conduit has also decreased, since this harmful travertine naturally settled in it. The amount of water entering the city has become much less. And the city grew and demanded more and more water. Under Emperor Aelia Hadrian (117 - 138 AD), it was decided to build a second water conduit. Hadrian is one of the most peaceful emperors of Rome. He is credited with only one military action - the brutal suppression of the famous Bar Kokhba uprising (132-135 AD) and the destruction of Jerusalem. And there were no more wars, and Adrian built, thus occupying the idle legionnaires. He ordered to rebuild a new Roman city on the ruins of Jerusalem, naming it in his honor Aelia Capitolina. And also to lay the second Caesarean aqueduct. Over 22 km of this water conduit, 9 memorial plaques were found, which immortalized the names of the legions who built it. The sixth and the famous tenth legions are mentioned there. But one memorial plaque is completely erased. One can only assume that it was dedicated to the 22nd legion, which suffered a crushing defeat at the hands of the Bar Kokhba partisans. The Romans considered it a shame and did not forgive defeat. So they erased the memory of the 22nd Legion, although it was also built.

The second conduit is almost twice as long as the first. It starts in the same mountains, but higher and further. But in the seaside zone, in front of the city, it just adjoins the first. Yes, so tight that even standing next to these aqueducts, you will not immediately realize that there are two of them. Only where the arches do not coincide for some reason can two separate structures be distinguished. Moreover, in the photo, where the aqueducts break off, destroyed by the sea.

THE WATERS OF CAESAREA 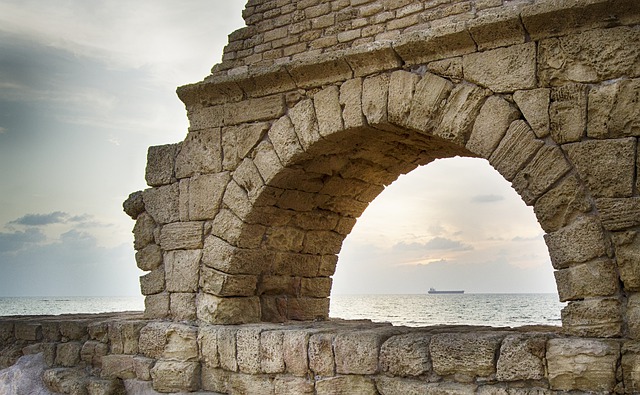 Caesarea was the administrative center of the province of Palestine Prima. And it remained the capital throughout the Roman and Byzantine period until the 7th century AD. The city continued to develop, and the water conduits supplied less and less water, because, for various reasons, they gradually deteriorated. Somewhere the soil saturated with water subsided, which led to a change in the geometry of the water conduit and a violation of the uniform flow of water. Somewhere a water pipe was pirated by residents and given some water for irrigation. Somewhere a dense plaster cracked and chipped off, and a leak opened. All this had to be detected and repaired in time. For this, a special repair team existed in the city.

In Byzantine times, all these repairs were insufficient and a radical decision was made. The fact is that the abundant rainwater that falls in the mountains of Samaria goes into the karst cavities of these mountains and makes its way out in the coastal Valley north of Caesarea with many springs. However, they are at a low altitude. Therefore, the valley of a thousand springs was fenced off with a dam, flooding hundreds of hectares of land and raising the water level by 7 meters, and from there they began to take water. However, this water was of a significantly poorer quality - salty and undrinkable. But it was quite suitable for baths and public toilets. To supply this water, another one, the so-called low aqueduct, was built.

THE END OF THE AQUEDUCTS IN CAESAREA 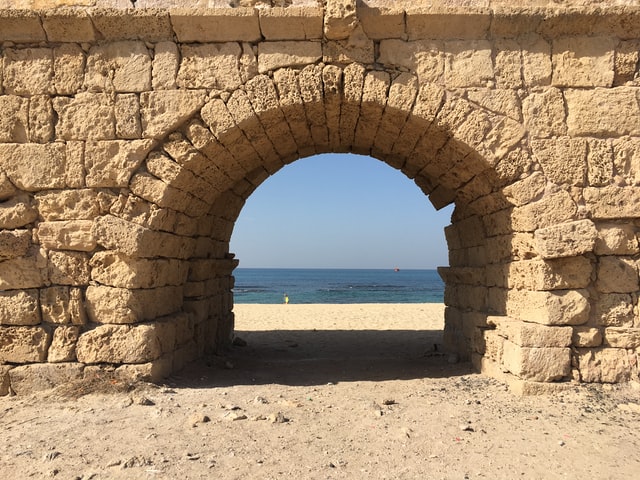 With the arrival of Muslims in the 7th century, Byzantine civilization ceased to exist, building codes and rules lost their meaning. The aqueducts did not survive this and fell into decay. The flooding of the valley led to the formation of a huge dead swamp Kabarra, in which Anopheles mosquitoes settled. The area has become unhealthy. The population left here. It was possible to drain this swamp only at the beginning of the 20th century. When the Jews began to return to their Promised Land

Would you like to see the original aqueducts of Caesarea? Book a private tour to Caesarea National Park today!