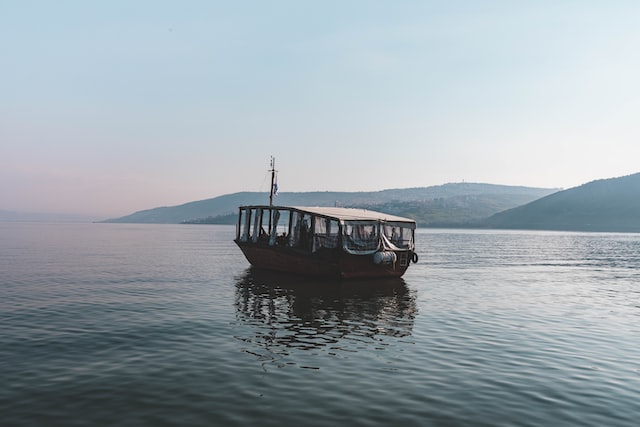 I love the Sea of Galilee, also known as the Ginosar Sea or Kinneret lake...my best memories from various tours taking place exactly here! Traveling with my kids or showing my guests the most sacred sites related to Jesus and the last Jewish revolt versus the Roman army, what if I told you that you could float on this magical lake and see these places from the other side? A boat ride over the magical waters of the Israeli lake will be the ultimate experience to explore and admire the scripts.

Thousands of people visit the shore of the Sea of Galilee each year because it is a natural wonder and a place of tremendous religious significance. It is the lowest freshwater lake and second-lowest lake globally after the Dead Sea(-230 meters below sea level), and it is situated in northeastern Israel. This lake was given various names throughout the age(Ginosar lake, Kinneret, Jesus lake, etc). Whatever name one gives it, the Sea of Galilee is well renowned for its wide variety of tourist attractions for Jews and Christians. In light of everything said above, a boat ride on the Sea of Galilee is the best option to connect to this amazing location!!!

The historical city Tiberias, the Tiberias hot springs, Kibbutz Ginosar and the famous Igal Alon Museum, the best hiking Arbel National Park, and a wide variety of Christian-related sites such as Tabcha,  Capernaum, Corsi, Manza Cristi, Yardenit are top-rated tourist attractions. Therefore, the ideal option is to observe the shore's attractions from the water. On my private Sea of Galilee Boat ride tour, you can enjoy a unique sail to learn more in-depth about this well-known lake's historical and spiritual importance.

Experience Jesus' miracles by boating on the Sea of Galilee

A place with a lot of religious significance is the Sea of Galilee. Along its coastlines, Jesus spends a significant portion of his mission. Four of Jesus' disciples were chosen from this group, including the fishermen's brothers Simon and Andrew, and the brothers John and James. The four men were convinced of Jesus and abandoned everything to follow in his footsteps, which was another aspect of his Miraculous Catch of Fish.

We will dock next to the Altar and visit the famous location.

Jesus also accomplished other noteworthy miracles at the Sea of Galilee, such as feeding the multitude, calming a storm, and walking on water. On a mountaintop overlooking the Sea of Galilee, it is even stated that Jesus delivered his Sermon on the Mount, the longest continuous sermon of Jesus found in the New Testament when he utters the well-known "Lord's Prayer." Traditions today point to the Sea of Galilee's Mount of Beatitudes.

Things To Do the Around the Sea of Galilee

Both Christian and non-Christian tourists visit the Sea of Galilee nowadays. For Christian tourists, we have an amazing new attraction, a 60 km hiking track opened in 2012 also known as the "Jesus Trail," which leads to Capernaum, an ancient fishing community that Jesus frequented, through Magdala and Ginosar. Numerous additional well-known sites are mentioned in the Old and New Testaments.

Regarding the non-religious options, the City of Tiberius offers local restaurants, water parks, and friendly and not expensive hotels with an opportunity to stay overnight and continue exploring the Golan Heights or Galilee the next day.

How long is the Sea of Galilee boat ride?

Get off the Sea of Galilee Boat Ride

Perhaps you want to visit the region by car? visit the Mount of Beatitudes, where Jesus delivered the Sermon on the Mount, the Jordan River Baptism site where Jesus was Baptized by John, the Church of the Multiplication of Loaves and Fishes, where the miracle of feeding the multitude took place, and the Kibbutz Ginosar, which is home to an ancient boat discovered in 1986 from the Sea of Galilee that dates back between 72 BCE and 92 CE and may have existed during the lifetime of Jesus. Of course, taking a boat ride on the Sea of Galilee can bring Jesus' well-known miracles to life in a way that you can only imagine.

Enjoy lunch or dinner on the coast and try the famous St.peter's fish, what a fabulous experience!

BOOK THE SEA OF GALILEE BOAT RIDE AND CONNECT TO THE BIBLE!