EXPLORE BETHLEHEM AND JERICHO ON ONE DAY TOUR

My tours in Israel including the Israeli section but also the Palestinian part, these two sections are integrated and not working one without the other.
during the Bethlehem and Jericho tour, we will visit a very important location for Christians and pilgrims,
THE OLDEST CITY IN THE WORLD - JERICHO

Jericho is an ancient city located in the West Bank just 26 km from Jerusalem, Hebrew the meaning of the name Jericho is fragrance, the city is also known as the city of Palm trees and the city of beginnings according to tradition Jericho is one of the oldest cities in the world Estimated age 10,000 years it is also one of the oldest agricultural settlements in the world ever established.
According to the biblical tradition, Jericho was the first city in the land of Israel which was conquered by the Israelites under Joshua, This is a fascinating story about how the Israelites circled the city over seven days and the question was how to conquer the city without any weapons, the solution was to blow the shofar and then the walls of Jericho collapsed.
This event connected to the Jewish holiday of Sukkot since the Jews are circling the bimah once a day and in total for seven days.
this event A rare fragrance of the wall was found in Jericho and believed that was the first protecting wall in the world since 1994 after the Oslo agreements Israel gave the city to the Palestinians and ever since Jericho is supervised by the Palestine Authority.
In the Christian tradition Jericho is mentioned in the Gospels, Jesus from Nazareth first went through the city and healed blind beggars and also inspired and local tax collector named Zacchaeus to repent he’s dishonest practices,
Mount of Temptation is a hill in Jericho mentioned in the gospels as a place where Jesus was tempted by the devil and spent 40 days and 40 nights fasting and meditating during the temptation of the devil.
Reaching those places is not a problem today since we have a cable car and that can take us up and down so we don’t need to climb on foot, and we can enjoy a great view from the top of the mountain also a restaurant, a café, and a souvenir shop.

THE BIRTH OF CHRIST - BETHLEHEM 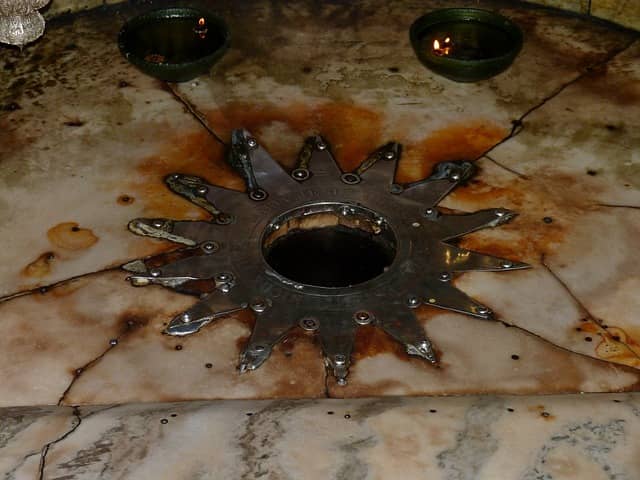 Bethlehem Or in Hebrew the house of bread is a city located on the west bank inside the Palestine authority, the distance from Jerusalem is about 6 km south,
In the Jewish tradition, Bethlehem is mentioned as a place where the kings of Israel were crowned, the most famous one was King David almost 3000 years ago, the city was destroyed by the Roman emperor Hadrian during the second century and then the city was rebuilt Again by the great Queen Helena and her son Constantine the great, they constructed the most important church in the holy land during the fourth century, the church of the nativity.
Usually, people who visit Bethlehem come for two reasons, the first one is religious since Bethlehem is considered a place where Jesus was born.
In the gospels, Jesus's parents are mentioned for traveling from Bethlehem to Egypt  After Jesus was born. since the order was given by King Herod to kill all the boys who are two years old or older in the surrounding area Josef received a message from the angel Gabriel and the holy family decided to go down to Egypt and later they settled in Nazareth.
The highlight of the Bethlehem and Jericho tour is the Nativity Church which preserves  the birthplace of Jesus, the grotto is the oldest site which is still used to worship by Christians and the church is probably the oldest in the holy land, the church was constructed by Constantine the Great and his mother Helena, During the same time they constructed the church of the holy sepulcher in Jerusalem during the fourth century,
The church remains in the original formation since the Byzantine period with slight changes from the crusade period, for example,2 bell towers were added and different paintings and mosaics were.  the church has three major Streams such as the Armenian, catholic, and greek orthodox.
The "Crown" of the church is the silver star in the central altar marking the spot where Jesus was born. In the middle of the 19th century, this Silverstar was stolen by Greek monks who wished to remove the Catholics from the church And this event probably contributed to the great Crimean War against the Russian Empire.
Today the church is a world heritage site listed and protected by UNESCO organization, in the past 200 years there is a status quo and nobody attempted to make any changes without an agreement with the other streams.
The second reason to visit Bethlehem is not religious at all, people who like art will probably love the opportunity to see the original works of the famous Palestinian artist Banksy, his works are known All over the world, during our drive in Bethlehem you will be able to see and photo his works scattered all over the city especially on the separation wall and the walled-off hotel.
The culinary scene in Bethlehem is amazing since the locals grow sheep in open natural fields, the lamb chops are probably the best dish and the best quality that you can find together with a local dish of Hummus.
RECOMMENDED SITES TO VISIT DURING THE BETHLEHEM AND JERICHO TOUR

2. Marsaba Monastery - The largest and most impressive monastery in the Judean Desert is the Marsaba Monastery, named after the monk Sabas (Mr. means lord in Arabic), who even appeared in Jean-Claude Wadden Dam's film - "The Order". It is a Greek Orthodox monastery that is not connected to water, electricity, or telephones. It is home to 15 monks, who do not read newspapers, do not use the Internet, and do not have a Facebook or Twitter account.

On the cliff of Kidron River is a breathtaking vantage point on the walled monastery, from which dozens of caves and solitary cells can be identified on the mountainside. To visit the monastery, you have to cross the stream and climb the stairs that go up to it.

3. St. George's Monastery - is a Greek Orthodox monastery, built on a hillside in the Euphrates River, near the Ein Kelt spring. The monastery is located in the Judean Desert, about 5 km west of the city of Jericho. It was founded in the Byzantine period in the late 5th century AD and reached its peak in the days of the monk Georgius in the 6th century AD, after whom the monastery is named.

In 614, during the Persian conquest, the monastery was destroyed and remained abandoned for a long time. It was restored during the Crusader period but was again destroyed by the Arabs. The present monastery building was rebuilt in the late 19th century by the Greek Orthodox Church.