Visit the Syrian Headquarters on the Golan Heights 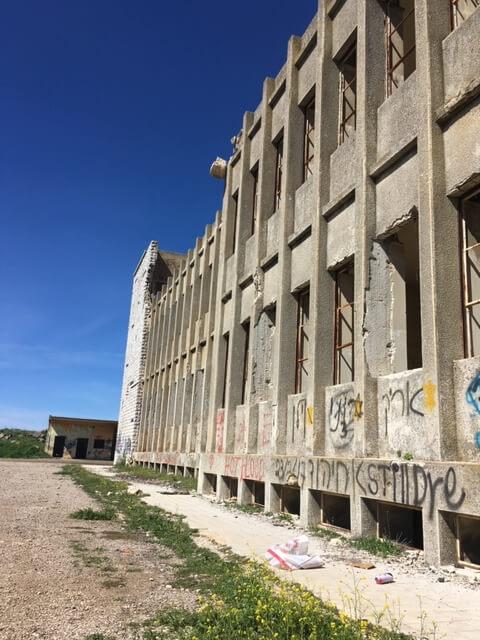 THE CONSTRUCTION OF THE HEADQUARTERS IN THE SYRIAN GOLAN HEIGHTS

In 1962, a magnificent building was erected on the outskirts of Konytra by the soviet military, which served as the commander of the Syrian army on the Golan Heights in front of Israel * during the Six-Day War and Yom Kippur war the building was bombed, but remained on a hang, in recent years it has become a visiting Center in the framework of the "trail of Eli Cohen" and a location of the ghost building where some of the secrets of the Syrian army were revealed in 1967.

Great power is hidden in what once was the great building and one of the massive in the Syrian Golan Heights. During the Six-Day War, the Israeli Air Force arrived and peeled off several layers from the building, after which during the Yom Kippur War, it destroyed even more by several bombings.

What was used by the general Syrian headquarters on the Golan Heights, is now a ripped skeleton, A gray giant in the middle of nowhere, a giant whispers that his wounds are still gaping and around him other souvenirs in his image and likeness – the ruined Konytra, the village of Mansura wiped out and the remains of Army camps.

A ghost building, dark corridors, empty rooms, hacked Windows, fragments of walls and roofs, Crooked ferrets, and corridors in which ghosts are blowing.

Only the naked walls, which over the years became the Home plot of various graffiti painters, know how to tell about the humiliating collapse of the Syrian army in the Golan of 1967, which also began here.

The Construction began in 1960 during the time of Haddam Abdul Halim, who was then governor of Konytra and ended in 1962. Salman Fahr al-Din, a resident of Magdal Shams, who conducted several investigations into the overthrow of the Syrian army in the six days, tells us that the stories that the structure first served as a hospital, are not true. According to him, the structure was from the beginning of a military command that dealt among other things with civil issues. It is possible, he says, that the source of the mistake is at the address "Amalit" that was on the building at the time. The word Amalit in Arabic means operations, but it is also interpreted as surgery.

The building is located about one kilometer west of Konytra, and about two kilometers east of Mount Bental. In the Syrian period, it was on the road between Konytra and the village of Mansura. Currently, it is approximately.2.5 km southeast of Brown junction on Route 98. Following from the south from the direction of the Ein Zivan can see the building on the right. Following North from Brown junction, you will see the building opposite. Turn carefully from the bend of the road and go down a broken dirt road, 100 meters to the building.

The building was built in the form of an inverted N. Its length is about 120 meters and its width is about 30. It has two floors plus a partial basement floor. It includes hundreds of spacious rooms, some with large windows. In each wing, there was a large toilet room with showers. Especially wide stairs led from the road to the facade of the building. They can be seen in the upper picture. These steps some of which were damaged at the time, are not visible today after the green vegetation covered them. It has a large inner courtyard and covered parking for about 20 vehicles.

The building was erected under Russian supervision in a high building standard both archetypically and mainly in terms of materials. Fact: despite direct hits from the air of heavy bombs, the structure remains on a hang. The most significant damage was caused by a bomb that pierced a hole in the center of the building. The place collapsed pointwise, including part of the staircase. Besides this, the entire structure is not in danger of collapse.

From photographs from 1967, the building was seen without external damages. Here and there curved iron and a piece that collapsed remembered several tank shells of Division 8. The building suffered the most damage during the Yom Kippur War. Some argue that in this war the Syrians are the ones who bombed the building, so as not to be used by the IDF. But there is also an inverted version.

It would seem that not all of the commander of the senior Syrian army was sitting in this building, but was scattered throughout Konytra. In the book" Conscience will open the evil " written by Pesach Mantovani, which relies on Syrian sources, with the opening of the Six-Day War, the entire Syrian headquarters moved to the front building. It was defined by a special order issued by Defense Minister Hafez al-Assad as the headquarters of the field army and was responsible for the management of all operations.

In the Northern Command intelligence of the IDF, this building received the mark 8225 / B. With the beginning of the Air Force bombing at the depth of the Syrian plateau at the beginning of the war, the facade building was one of the targets. According to Salman Fahr of Magdal Shams, according to information he had, the building was abandoned on Wednesday 7 June 1967, two days before the IDF began to actually attack the Syrian sector.

THE BATTLE OVER THE GOLAN HEIGHTS

The initial forces that came to the front building and Konytra were Israeli tanks from the 377th battalion of the 8th Division-on Saturday 10 June 1967 around 15:30. In the book" on both sides of the plateau " by Ezekiel Meiri, it was written that the headquarters of the front, a prominent building, absorbed several shells, and the house remained still.

Later that day, it was lieutenant colonel Pinchas NOI Alush of Golani, who went up to the roof and hung the flag of Israel on it. Thousands of documents were found that were subsequently used by the Eman in the analysis and understanding of the Syrian army in the Golan until the six days.

It seems that in the early days the building of the front was located from the headquarters of the Golani Brigade, the 3rd Brigade, and the 36th Division under the command of the champion of Elad Peled.

The first discussion was held on Sunday 11 June 1967 with the participation of Defense Minister Moshe Dayan, chief of staff Yitzhak Rabin, North Command champion David Elazar, Air Force Commander muti hood, Elad Feld, and more. This event was immortalized in a picture in which the champion of Peled appeared at the top of the table.

In this discussion, they were engaged in determining the new borderline, including the seizure of Hermon, the control of the military administration over the civilian population, the return of units from the Syrian level, and the training of operational units for current security needs in the new space.

Over the years, they sat in this building from various IDF headquarters. In the part of the time until the Yom Kippur War and after it, a unit of UN observers was located in it.

In recent years, a building from the headquarters of the Syrian front has come to life. It was designated as a landmark at the stations as part of a journey in the Golan Heights following Eli Cohen, "Our Man in Damascus." One of my custom tours of the Golan Heights begins with Hamat Gader(Al-Hamah) continue to Golan and passes among others in Tawfiq, Pik, in the settlement of Eli-ad (named after Eli Cohen)) and more, until we arrive at the front building of the Syrian headquarters.

Before the main entrance was placed a statue of a lock, the meaning of which – the key to the Syrian military secrets, which Eli Cohen obtained part of and transferred to Israel.

In the" room of Eli Cohen " in the northeastern wing, three signs were fixed. The main ones say that Eli Cohen visited the Syrian intelligence division here on October 19, 1962, to obtain a license to tour the Golan Heights. It should be noted that only the inhabitants of the Golan Heights were allowed to move around it. External visitors including Syrian residents required special permits, and not everyone received. The license he received from Cohen teaches about his success in approaching senior officials in Syrian power. Tour guides like to tell here that the IDF victory in the Six-Day War has been achieved thanks to information conveyed by the Mossad agent in Damascus.

Eli Cohen was exposed by the Syrians and executed in 1965. The fact that his bones have not been returned to Israel and the subject still employs his family and various factors in Israel, contributes to the relevance and attractiveness of the journey in the wake of Cohen. The building from the headquarters of the front, for this purpose, is an interesting and kind destination also thanks to the wandering through it and the view from it to the destroyed Konytra, the water reservoir, Hermon, and the surrounding wires.

About half a kilometer east of the building was added about ten years ago a water reservoir built by Israel-the Konytra reservoir. This water Hope, which has become the focus of small wrangling between the two countries, is designed to seize the floodwaters and enrich the water supply for Agriculture of the Golan Heights.

As a result of the injuries suffered by the building of the facade, there are quite a few safety hazards: here and there part of the roof on the verge of collapse, the stairs are without a railing, the roof is fraught with obstacles, like holes that anyone who resides to them may plummet to the floor below. The whole roof is without a railing and the one who approaches his lip runs the risk of falling. Despite this, access to the building and the entrance to it are open.

The hacked rooms, hundreds of graffiti paintings, and especially the spirit of the past, all give the structure a surrealist appearance and character, which made it a sought-after place for fashion, automotive, and night parties. Definitely a place worth a visit.