The Stone of Unction/Anointing in Jerusalem's Holy Sepulchre Church 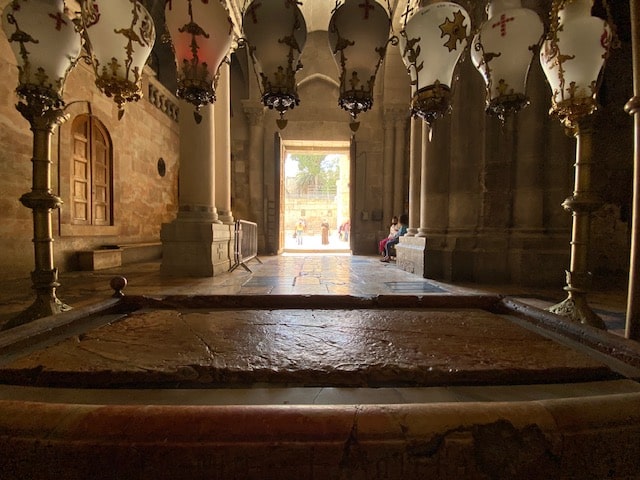 The stone of anointing in the Church of the Holy Sepulcher is of great importance for Christianity. Pilgrimage helps to realize the way of the cross of the Lord, his earthly life.

No wonder the Way of the Cross occupies a special place in Catholicism and Orthodoxy. Jerusalem and Golgotha are the centers of the world from the point of view of a Christian. Since only through the sacrifice of Christ this world has a chance for salvation.

Miraculous Anointing Stone in the Church of the Holy Sepulchre 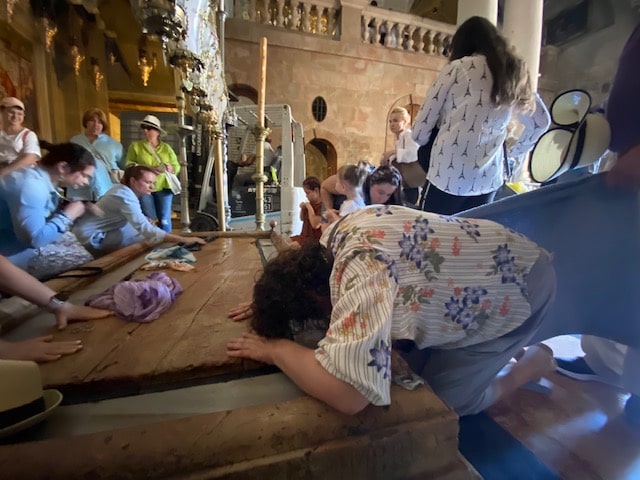 The anointing stone (Unction stone) is one of the shrines of common Christian significance. There are few of these left over the past 2000 years, and most of them are associated with Israel and Jerusalem. To realize what power the anointing stone conceals in itself, one must visit the Church of the Holy Sepulcher.

Now the stone itself, on which Jesus Christ was prepared for burial, is hidden by noble pale pink marble. Caution is not superfluous - Golgotha is one of the most visited places on the planet. And the anointing stone itself, on which crosses and icons are illuminated and blessed, could be erased from the touch of pilgrims.

Eight lamps, representing the eternal sacred fire, hang above the stone. Christians think that the Myrrha and the stone streams it flows from have healing properties. For pilgrims, the consecration of icons and pectoral crosses is not a goal in and of itself. However, true believers hold that a cross blessed on the anointing stone will offer protection from any disease.

The anointing stone in the Church of the Holy Sepulchre is currently located in the central vestibule of the modern basilica complex. The mosaic panel behind it is current - it was created only in 1990. To the right of the stone is the path to Golgotha. On the left is a circle where the Mother of God is watching the preparations for the funeral. The circle is also made of marble.

How was the Unction Stone in Jerusalem Found? 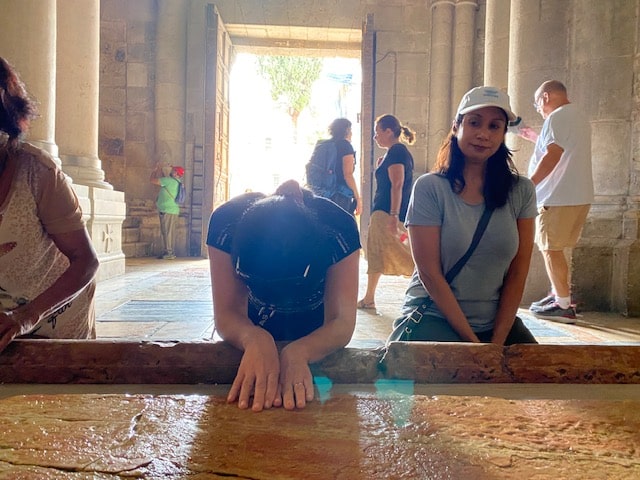 Like other iconic Christian relics of Golgotha, it was acquired by St. Helena, the mother of St. Constantine, who converted to Christianity as a Roman emperor. Sometimes in the historical sources, you can read that the gospel text, carved near the stone, has also been preserved since those times. But this is nothing more than a legend.

From Golgotha, on which Jesus was crucified, there was not much left even by the fourth century. Several monstrous oppositions (for their time) and Jewish uprisings significantly changed the face of Jerusalem. Which the Romans, then still pagans, first thoroughly destroyed. And then rebuilt as the Roman city of Capitolina.

The city dedicated to Jupiter and the temple of Aphrodite on the site of Golgotha were erected at the direction of Emperor Hadrian. About which they rarely write anything but good. Probably the last iconic Roman emperor of the pre-Christian era.

He is considered a "builder", at the direction of Hadrian, a lot of architectural monuments were built, and not just in Jerusalem. Therefore, it is not worth blaming the Roman emperor for the deliberate desecration of Christian and Jewish shrines. Firstly, everything was destroyed and defiled before him. Secondly, what is now called Old Jerusalem is the merit of Adrian.

After St. Constantine made Christianity the official religion, his mother, St. Helena, began to work, looking for shrines. It was she who found Golgotha, most of which was dug up. And also the place of the cross and the cross itself. Miraculously, Saint Helena received the stone of anointing and the tomb of Jesus.

Modern archaeologists are generally inclined to agree that the Roman excavations from the time of St. Helena correctly identified the site of Golgotha. But representatives of some branches of Christianity believe that Golgotha is located elsewhere.

But it is over the Unction stone in the Church of the Holy Sepulcher that 8 inextinguishable lamps burn. According to the number of confessions for which this place is a shrine.

VISIT THE UNCTION STONE ON A FASCINATING CHRISTIAN JERUSALEM TOUR