Caesarea Chariot Race - Who Is The Wealthiest Athlete Of All Times?

THE WEALTHIEST ATHLETE OF ALL TIMES 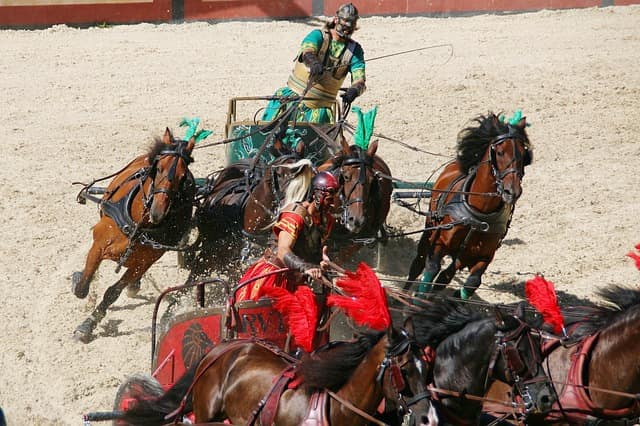 Tiger Woods is known to be a golfer, and he was the first athlete to reach a salary and value of a billion dollars. Floyd Mayweather was, a boxer, earned $ 1 billion in his boxing career. Footballer Cristiano Ronaldo has also recently risen to the billion dollars in his glorious career. Michael Jordan's net worth is close to $ 2 billion due to sponsorship deals, sports contracts, and sports investments.

However, none of them comes close to even being the highest-paid athlete of all time! Meet the most underrated competitor from the times of Jesus.

Gaius Apollius Ducles was a rider of ancient Roman chariots, who became one of the most famous athletes in ancient history.
At the time of his retirement at age 42, his total career income was 35,863,120 semesters. The net worth of Gaius Ducles today would be fifteen billion dollars!!!

With such a sum of money, he could feed the whole city of Rome for one year or finance the whole Roman army for a few months.
Gaius Ducles was not the best chariot rider as he won only a third of the races. However, he was the most exciting racing performer. A performer with a sense of audience and drama.

The magic move of each of his races was to lag for most of the race and then gallop forward during the final lap in the surprise of the race. It made the audience go wild. Every race with the Dukes soon became the event of the day in ancient Rome. Another reason why Gaius Ducles was able to amass such a huge fortune is that he survived. He survived because the chariot races were extremely dangerous and many promising riders died at a very young age.

The career of Gaius Ducles

Gaius Ducles was born into a middle-class family in 104 AD in Lusitania (modern-day Portugal) and began to become acquainted with the subject of racing as a teenager. The area where he lived was known for its stud farms that raised the best racehorses.
Having established himself as a great racing rider in Spain, he was called to Rome. His skills were displayed in full display in Circus Maximus.
The Maximus Circus was a chariot racing stadium that could accommodate a quarter of a million spectators. It was the largest racing stadium ever built in Rome.
There were four racing teams in Rome: white, red, blue, and green. One season per year. Each team had up to three carriages for the race.

Just like today, the people of Rome identified with one of the teams and became die-hard fans. In each race, they invested a considerable amount of money for horses and equipment in time as the riders made money by winning prize money and donations from fans.
If the chariot rider had finished in the top three places, he would have made money at full price. However, his talents were soon discovered and he joined the green team at the age of 24.

He competed in 4,257 races and won 1,462 races, finishing second 861 times and third 576 times.
After retiring at the age of 42, he took his huge income and bought land in the Italian countryside in Parnassus (modern-day Lod-Israel).
The chariots were drawn by two or four horses and were very light. As a result, catastrophic falls were very common. Great skill is required from the vehicle to prevent the carriage from tipping over. The rules allowed vehicles to perform all sorts of acts of urgency and collisions of opponents colliding with walls. The danger of being dragged or caught under the wheel was real.

The race at Circus Maximus included seven brutal laps of about 4,000 meters. The race lasted about ten minutes. There were 66 racing days a year. The emperors spent a fortune on races and gambled huge sums of money.

The carriage rider wrapped the reins around his waist and steered by shifting his weight. In the event of a crash, he could have saved himself only by cutting the reins with a curved knife.

Even today even a beginner athlete can be rich, however, this is not new, the best athletes have won huge sums of money after a long way and hard work. Also, changing teams or "colors" to get even more money is not a trademark of modern times, it was already there in Roman times as we could see in the case of Dios Gaius. Greed and the pursuit of fame are not limited to modern sports. This is a basic human phenomenon. People always want to have social capital and more money and more than that is better.

Gaius Ducles performed in the Hypodrome of Caesarea 3 times, and won 1 race, today you can see the famous arena and walk on a Private Caesarea tour it but without a horse, would you like to see it?