The best way to get familiar with the amazing old city of Jaffa and Modern Tel Aviv in one day.

Welcome to the middle east! this is not classic Europe and not the USA, this is a special blend between ages, cultures, people, and unbelievable stories, I invite you to visit the pearl of Israel, the center of our tiny country, join me for the best Tel Aviv and Jaffa tour by a private guide to see and to hear an amazing story. 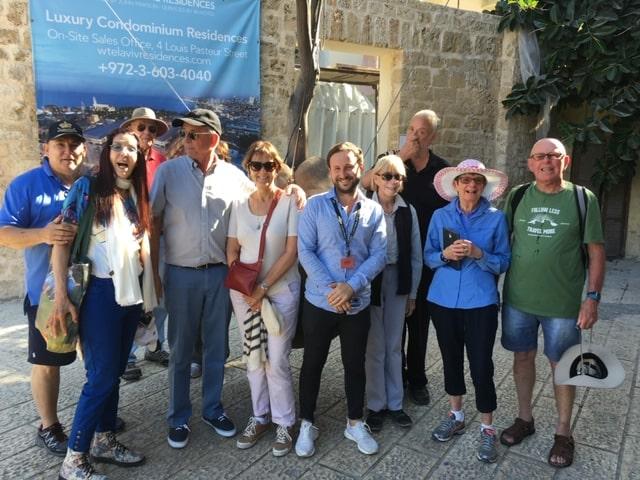 Old city Jaffa
Jaffa is mentioned in the Egyptian sources and the bible, the city probably named after one of Noah's sons Yefet.
The Hebrew translation of the name is "beautiful", visiting Jaffa with a private tour guide during any hour of the day, the beauty of the city and the surroundings will amaze you, the blue sea, the green trees, and the warm soft climate is the perfect combination To create a beautiful place as Jaffa.
The city of Jaffa was always a very important place since the city is located on the coast of the Mediterranean sea and it was used as a gate for different armies, kings, pilgrims, and different merchants arriving at the holy land and began their journey towards the holy sites such as Jerusalem or Jericho.
During our Tel Aviv and Jaffa tour by a private guide, we will be able to see the old city streets, every street has a different zodiac sign instead of the street name. the streets have amazing beige color and this is probably one of the best places to take some photos.
In the heart of the old city, you will be able to find different galleries of local artists, paintings, sculptures, and different handmade jewelry. A few museums are a great recommendation to visit, for example, the Ilana Gur Museum with her private collections of art from all over the world and also a chance to see her house from the inside. The museum of Ori Geller, the most famous Israeli illusionist that can bend spoons with his mind! and other local cool stuff.
People who like archaeology can visit Ramesses II's gate garden left from the Egyptian period  And sometimes, there is a possibility to see an active excavation.
An amazing opportunity During the Tel Aviv and Jaffa private tour is a place where you can make a wish, this is basically the parallel version of the western wall! , therefore, you will stop with your tour guide in jaffa at the wishing bridge to find your zodiac sign and to make your wish while looking at the marvelous Mediterranean blue sea!
The "Floating Orange Tree" is a real living orange tree that was planted in 1993 and designed by our local artist, Ram Morin, this beautiful object is the symbol of jaffa describing the 19th century from the best perspective and explaining to us why the oranges were so important to us ever since! this is also a great attraction and a perfect place to make amazing photos next to or under the tree!

The famous church of the old city of Jaffa is the Saint Peters Church, according to tradition Peter had a great vision on the rooftop of this building in which he was commanded by the Lord to eat animals that were not kosher in the Jewish tradition, he refused to eat them and God replied him," what God has cleansed you must not call common".
Ever since Jaffa considered the fundament and the place where Christianity actually began, on this guided tour in Jaffa and Tel Aviv I will provide you the opportunity to enter this church from the 6th century and even bless the stone of the foundation of the church.
Next to the old city, on our guided trip to Jaffa and Tel Aviv by a private guide, we will visit the famous flea market with its unique shops, this is one of the oldest and the best markets in Israel in the past 200 years, visitors of the holy land stopped in this market to exchange money, buy clothes before they began the journey towards the holy sites. you will be able to find antiques, authentic gifts, local restaurants, and fresh juice bars with live music.

My best private Tel Aviv and Jaffa tour provides live information, does not contain boring and facts, but is full of fascinating stories, legends, and ancient myths that you will not read in books and see in movies.

For more information about old Jaffa please read my ultimate guide about this amazing city.

Tel Aviv the city ahead of its time, which, according to the Israelis themselves, "never sleeps."

I am your private tour guide in Israel to Tel Aviv and I want to show you all the charm of the secular capital of Israel with its historic streets and ultra-modern neighborhoods.

Tel-Aviv began to develop, the culture developed together with wide and big streets, by early 1910 the size of the city was nearly 1 square km and the population almost 2500 people! after the first world war, more and more jews immigrated to Palestine since tel Aviv offered all the benefits of a good European classic city such as entertainment, restaurants, education, and many more.

In 1925 the "Father" Patrick Geddes, a famous Scottish architect together with Meir Dizengoff the Mayor has made a master plan for Tel Aviv, ever since the population began to grow especially after the nazis came to power and the immigration process accelerated dramatically and the final "stamp " was the partition plan of the UN making Tel Aviv legit for Jewish residence.


In 1948 the Declaration of Independence of Israel was declared in Tel Aviv in the same house where the first mayor of the city was living with his wife, the main man was David ben Gurion who declared this revolutionary message.

Today Tel Aviv is considered as the vibe, modern and commercial center of Israel combining old neighborhoods and progressive high-tech zones.
All the immigrants who arrived during different periods to Tel Aviv brought their own cuisine, culture, and architecture and created a unique city.

Tel Aviv has a huge number of galleries and museums, one of my favorites is the Bauhaus museum located in the historical center of the city, the Tel Aviv Museum of art is a great option to get familiar with the Israeli local artists, the Museum of history of Tel Aviv, Ruven Rubin Museum, and many many more.
On our Tel Aviv and Jaffa private tour by a guide, we will visit the Yitzhak Rabin museum, this is a great place to get to know Israel in different periods and the history of this great man who was the Prime Minister and was assassinated by a terrorist.
The streets are also amazing especially the Rothschild Boulevard with the biggest concentration of bow house architecture, the house where the historical declaration of independence of Israel took park, King George St. with the local amazing shops, and of course the promenade along the Mediterranean sea with the best beaches in the world!
Walking in the old neighborhoods such as Neve Zedek Will take you back to the past but also to the future since this neighborhood became one of the trendiest places in Israel for local designers and rich people, the residents today are famous people like Roman Abramovich and the Israeli wonder women Gal Gadot! I am your private tour guide to Tel Aviv and Jaffa and I promise to show you the hot locations of this amazing neighborhood.
The markets of Tel Aviv will amaze you with the colors and the variety of different foods alongside local restaurants, one of my favorite things to do is a culinary tour in the markets of Tel Aviv of this remarkable city so please keep it in mind. we will visit the central market of tel Aviv the Carmel market and we will be able to taste our amazing local fruits and have a chat with the locals, please don't rush and leave enough time for a local lunch in the market.
If it isn't enough on the culinary level we will drive to the next market, the Levinsky market, another great place to enjoy local outstanding restaurants and a huge variety of spices and colors.
The variety of restaurants is huge since we have so many different cultures merging one into another so don’t be surprised to be lost by making a decision where to eat, as a local tour guide in Tel Aviv I will be more than happy to advise you how to choose the right restaurant to eat every day.
Graffiti tour is also a great option on our private Tel Aviv and Jaffa tour by a guide in the trendiest neighborhood of the city called florentine, the neighborhood has developed in the past 10 years and still attracting the young population, this is the Israeli "Soho" a blend of underground bars, local designers, fantastic chef restaurants and amazing artworks sprayed all over, this part is great for families, couples and people who have been to Israel but looking for something fresh and different.

My favorite place to visit is called Sarona this is a neighborhood created during the 19th century by the Templars, a full structured city with a clinic, bowling course, oil press, winery, etc, the place was restored 15 years ago and the neighborhood rose again with the historical original houses that you can visit today on our guide tour in Tel Aviv and Jaffa, during the first years of Israel Sarona was the headquarters of the Israeli parliament and other governmental buildings, and even the secret place where the first airplanes were constructed during the war of independence.

Private Tel Aviv and Jaffa tours are made according to your preference and regime of life, without necessarily visiting uninteresting museums and other places for you.

A not less popular attraction of the secular capital of Israel is the diamond exchange center in Tel Aviv. The exhibition halls of the leading diamond manufacturers captivate the spirit with the beauty and richness of these noble stones. I will lead you for an exciting tour of the diamond exchange district and tell you what diamonds are preferred by the stars of the world's show business.

Visiting Israel won't be complete without visiting Tel Aviv and Jaffa tour by a private guide, this the right option to explore these cities and to touch the history, allow me as an expert living in Tel Aviv for the past 30 years to guide you and take you to the places where other tourists won't go, I know the right people who can open the right doors to be amazed by the most amazing stories especially during the night! if you like the nightlife I will be able to show you the right places such as the best bars and night clubs but also the right chef restaurants to enjoy the best Israeli kitchen