Beit Govrin: how much more can you go low?

A private guided tour in Israel to Beit Govrin: how much more can you go low?

Do not miss this amazing guided tour in Israel with a private tour guide!

Details of the guided tour in Israel to Beit Govrin National Park-Marsha:

Nature of the trip: the trip consists of visiting Point sites with a trip between them with a private tour guide in Israel. There is also a possibility to go between sites that are close to each other.
Duration of the trip: from one hour to half a day
Degree of difficulty of the trip: easy (at the entrance to the caves of medium difficulty)
Suitable for disabled and baby strollers: the parts on the earth are suitable
Itinerary length: from 200 meters to 2 km
Equipment for walking: hiking shoes, hat, water, camera, flashlight
Cellular reception: yes
The private guided tour is suitable for the season: for all seasons. In winter, it is also possible to hide in caves from rain and wind, and in summer it is pleasant to escape from the Khamsin. Spring trip dips in gorgeous bloom
Water characteristics in orbit: no
Services: Tables/ benches for sitting
Drinking water: yes
Buffet: yes
Night parking: no
Entrance cost: adult 28 NIS, child 14 NIS, group (over 30 people): Adult 23 NIS, child 13 NIS, student 24 NIS, senior citizen: 14 ruggedness
Entrance hours: the entrance to the garden closes an hour before the listed hours. Daylight Saving Time: Sunday-Thursday and Saturday 8:00-17:00, Friday and holiday evenings 8:00-16: 00,. Wintertime: Sunday-Thursday and Saturday 8:00-16:00, Friday and holiday evenings 8:00-15: 00. On New Year's Eve, Yom Kippur eve and Pesach evening: 08:00 - 13:00.
Phone: 08-6811020
Weather forecast for the excursion area at Govrin-Marsha:

1. Polish cave
2. The burrow of the crawl
3. * Cave of the columbarium
4. Cave bath
5. The canvas House and the water pit
6. * Choose one of the underground residential systems
7. * The hunting cave
8. * Bell caves
9. * Amphitheater across the road

The sites and services of the private guided tour in Israel to Beit Govrin National Park-Marsha: 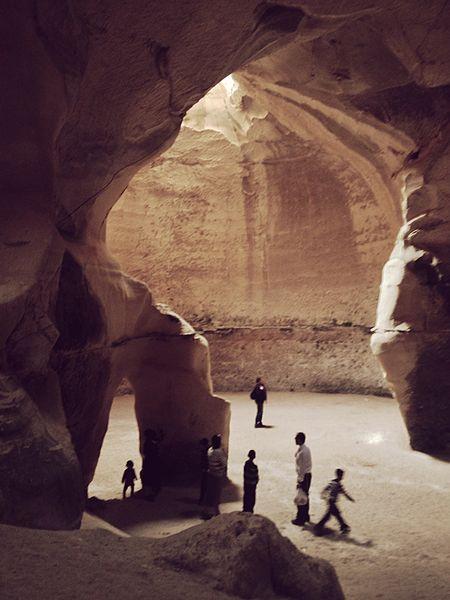 2.private guided tour to the Cloth house, a trip to the House of Govrin-Marsha

A small cave where you will find a Hellenistic bath that was used for bathing and perhaps for ritual bathing.
The canvas House and the water pit
In front of the bathroom, you will find signage instructing the descent into the canvas house, you must enter it during our private guided tour. The canvas House of the beam type was restored in a fabulous way. Here you will be impressed and well understand how the canvas House worked while being engaged. They would bring the olives to the grueling, put the olives on the sea stone, and with the help of an animal they would turn the Mamel stone. After the olives were refuted (crashed), they moved them to the sacks of the crooked. The bags are put on each other and pressed against them with the beam. The beam was tightened with the help of weights that weighed on it and increased the pressure on the baskets from which the oil was poured into the basins.

Two of its value impressive underground dwellings have been installed public visits, choose one of them with your private liecensed tour guide in Israel and walk around them according to the signs, it is impossible to get confused on the way and there are comfortable lighting and stairs throughout the underground tour, you will meet: cisterns, staircases, Cloth House, a columbarium.

If that's one high point for a guided tour in Beit Govrin house, maybe I'd tell you it's the Citadel on its impressive frescoes. This is a burial cave dating from the second century to PSN, in which frescoes depicting imaginary characters and mythologies are especially interesting. The drawings are most accurately restored to the original. (The source was destroyed by Bedouin shepherds about 100 years ago).
In the cave, you will discover precisely chiseled burial stars, and at the top of the cave a large cubicle that probably served as a coffin to the head of the crowd.

Do not miss the visit during your private guided trip in Beit Govrin to the big and impressive Bell caves. These huge caves were used for cutting bricks into the building. They came to the quarry from the roof of the cave, from a small round opening, and went down in the quarry line by line and took out bricks for the building. The engineering firm of the cave as a bell and this is the origin of the name. This engineering form ensures that the cave ceiling does not collapse on the workers ' heads and at the same time the cave also ensures a comfortable, rain-protected, and used working environment.

The Roman amphitheater is located on the northern side of Route 35, near the gas station. If you still have strength, go there and do not miss a glimpse while walking with your private guide, even a short one. In Israel, there are only three amphitheaters, and only one more impressive, in Beit Shan, as here. In the Roman amphitheater, they used to conduct battles for the swimmer and death between animals, between man and animal, and between man and man. Professional fighters were called: Gladiators. The victorious gladiators were well-known and highly sought-after celebrities in this cruel game world of Roman culture.

The history of Tel Marsha and Beit Govrin briefly

The city of Marsha was continuously inhabited until the late Hellenistic period. Similar to what happened in the land of Israel, in the Roman period, in the first century to Psalms, the settlement of Tel Nietzsche moved to settle near it and around it.

The Great Roman city that was based near the mound was called the House of Govrin and later received a name: Alliotropolis, the city of the free people. The House of Govrin was also inhabited in the Byzantine period, and in the Crusader period, it was erected on its ruins in a crusader fortification.

Marsha during the Hasmonean period

The most interesting historical episode that we will learn during our private guided tour in Israel To Beit Govrin, passed on the city of Marsha during the reign of the presidents and Kings from the House of Hasmonean. In the days of John Horcanos I the city is undergoing radical religious change. And what it was, so it was. John Horkanus was president of Judah and a high priest between 134 BC and 104 A.D. John was the son of Simeon the Hasmonean, and the grandson of the high priest Hasmonean Matthew. During his reign, John Horcanos I increased the kingdom of Judah and established it through numerous conquests. It is occupied by extreme areas of Samaria, the Lower Galilee, past the eastern Jordan, the Judean lowland and Mount Hebron, and the southern coastal plain.

In the book of ancient Jews, Josephus wrote all the events of the conquests. One of the interesting episodes is the conquest of Adomea. In 112 BC, John Hyrcanus went on a conquests campaign in a land called then: Idumea. This area was inhabited by foreigners who came to the area a few generations earlier. Their origin was from red, and in their name the region was called: adomea. John conquered the two main cities: Marsha and Dora. After conquering the cities and the Hebron mountain area, John horkanus forces the inhabitants of the Reds to convert:"and he decided all the Reds and allowed them to stay in the country only if they were circumcised and followed the laws of the Jews, and they accepted the laws of the Jews. And from that time on, these were Jews" (ancient Jews, 13, 258-257).

The secret of the story in the lowland area is Kirton rocks. And why a secret? IN MY PRIVATE GUIDED TOURS IN ISRAEL I WILL ANSWER! Because the cardboard rocks are the ones that have allowed the complex and complicated quarrying that has left so many significant remains, especially in the subsoil, that have been remarkably preserved for over 2000 years!.

The cardboard rocks are soft limestone rocks, the formula of which is: CaCO3. They sank in the ocean to a depth of about 60 meters. After the exposure of the cardboard to the air, it began to wear out, and its upper part developed into hard limestone rock, 'Nari', 1-3 meters thick. The soil stratified in the valleys in the Judean lowlands also evolved from the rocks of the Nari, and its name is dark or light rendzina.
From the cardboard rock, it is convenient to place bricks for the building and quarry of pits for many uses: pits for non-seeping water, warehouses, workshops, and areas for agricultural activities.

VISITING ISRAEL WITH A PRIVATE TOUR GUIDE OPENS NEW POSSIBILITIES, GUIDED TOURS IN ISRAEL TO BEIT GOVRIN IS THE BEST SOLUTION EXPLORING HIDDEN PLACES LIKE HIDDEN CAVES AND SECRET PATHS WITHOUT CONFUSING AND LOSING YOUR PATH.