THE DOME OF THE ROCK IN JERUSALEM 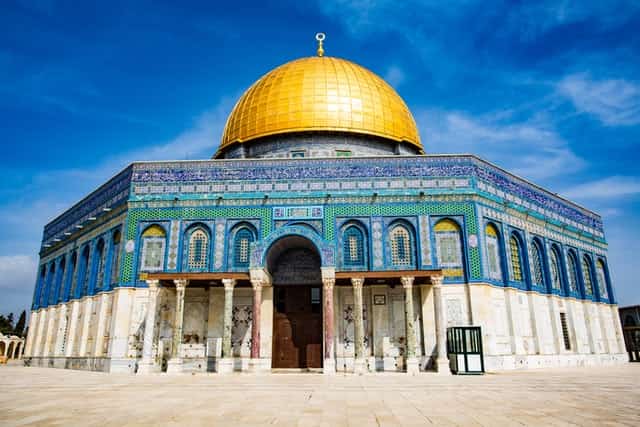 Every tourist visiting Jerusalem wants to see the "business card" of the Israeli capital, the Temple Mount, and the Dome of the Rock. This amazing structure is a holy site to the 3 major monotheistic religions of the world and located in the heart of the old city of Jerusalem. Every tourist can visit the compound but the Dome of the Rock and the Al Aqsa mosque is available to Muslims only. Take a private tour guide in Jerusalem and visit one of the most remarkable sites in Jerusalem.

THE HISTORY OF THE DOME OF THE ROCK 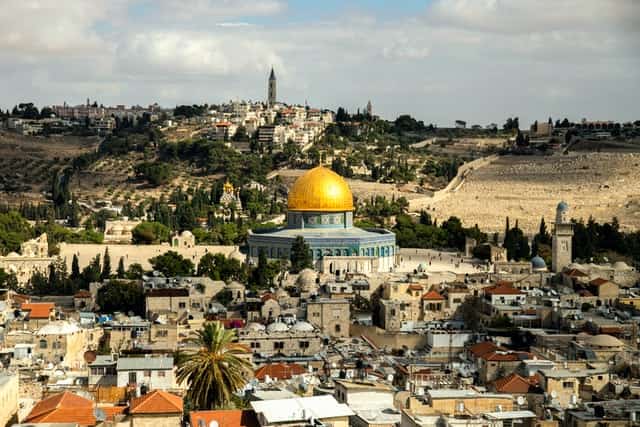 The "Dome of the Rock" is located on an upper plaza located four meters above the lower plaza of the Temple Mount. The area of ​​the upper extension is 23 dunams (the area of ​​the entire Temple Mount is 144 dunams). Eight wide staircases (six were built with the initial construction and two were added later) lead to the upper plaza, with each staircase ending in a magnificent arcuate system, a kind of entrance to the upper plaza.

The main structure on the upper extension is the Dome of the Rock built by the Umayyad caliph 'Abd al-Malek in 691 AD. It is not a mosque in the conventional sense of the word but the abode of the rock (the drinking stone) which is in the center with a dome above it. The role of the structure is to strengthen and glorify the rock.

THE IMPORTANCE OF THE ROCK TO THE JEWS

Here Abraham bound Isaac and here was also the Holy of Holies (according to the majority opinion) while the Temple existed.

The tradition that has developed over the generations is that Abraham bound his son Ishmael and from this place, Muhammad ascended to heaven in the night journey.

There is also a tradition that on the Day of Judgment the Kaaba will unite with the Foundation stone in Jerusalem, where the trial of the souls will take place.

The importance of the Christian tradition is attributed to the Byzantine period, here stood a magnificent church on the ruins of the temple.

Muslim historians have given reasons for the construction of the magnificent structure:

The historian Eliakobi - a 9th-century Shiite historian said that at that time the rule in Mecca was in the hands of Abdullah Ibn al-Zubir who demanded that the pilgrims swear allegiance to him, but he was opposed to 'Abd al-Malek who ruled from Damascus. Therefore Abed El Melech preferred that they did not make a pilgrimage to Mecca, and Jerusalem became an exchange place for a pilgrimage. So that it could serve as a place of pilgrimage instead of Mecca Doug Abd al-Melech glorified it.

The famous traveler of the the10th century Mokdasi wrote that in Jerusalem the mosque had to compete with the glory of the Church of the Holy Sepulcher so that the Muslims in Jerusalem and those coming to it could be proud of their mosque. 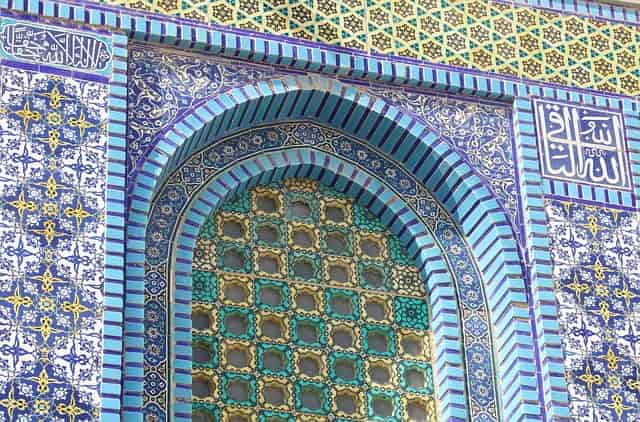 Beyond Damascus, the capital of the Umayyad caliphate was far from Mecca, and Jerusalem was a close place.
The Jewish tradition motivated Muslims to convert a Jewish holy site to Islam a holy place.
Inside the mosque, there is an inscription claiming that the builder would have replaced al-Mamun, but it turns out that the builders of al-Mamun replaced the name of 'Abd al-Malek with the name of al-Mamun but did not replace the year of construction, so the written date is 691 AD, and al-Mamun came to power 120 years later! (this can be a mistake or made in purpose)

During the Crusader period (12th century) the Dome of the Rock became the "Temple of the Lord" (Templum Domini), and Christian traditions were attached to it. The Crusaders placed a cross on the structure and built a trellis around the rock to prevent pilgrims from taking souvenirs. Salah a-Din in 1187 Islamized the place. For the years that followed, the building underwent renovations but did not change. Small structures were added to the mountain itself but no more than that.

The structure of the Dome of the Rock was described by the Persian traveler to the 10th-century Mokdasi:

In the middle rises as wide as the mosque in "Medina" and to it on each side rise systems of wide stairs…. In the middle of the plaza is the Dome of the Rock built on an octagonal structure and has four openings each facing a system of stairs leading to the courtyard …… 3 single central round avenues (around one center) of pillars made of remarkably beautiful marble with a low vault inside. Inside the temple on the rock. The height of the dome from its base to its summit is 100 Amot(old Jewish traditional measurement unit). Clad in marble and mosaic. The dome is built in three sections: the inner in decorated panels… then iron beams and finally wooden boards on which the outer panels are fixed …… At dawn when the sun first shines on the dome the structure is wonderful to see and there is no other like it in Islam, Idolaters, who compete in beauty in this structure. "
From reading this description it turns out that only a few changes have been made in the past 1000 years.

THE FOUNDATION ROCK IN THE DOME OF THE ROCK 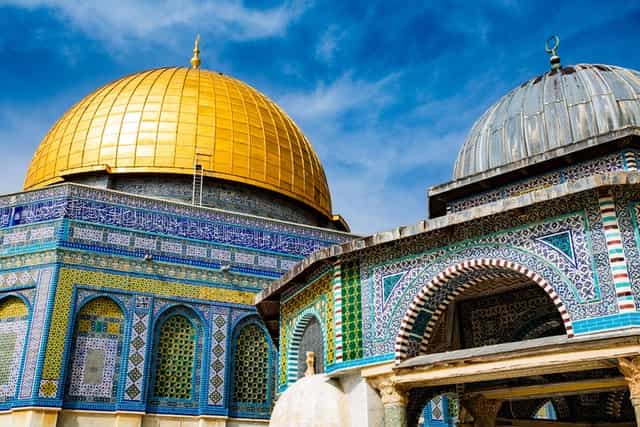 The original faded mosaics were replaced by the glorious Turkish Sultan Suleiman with porcelain tiles called Kashani (Persian) tiles. The coating of the dome was replaced in the 16th century with a lead coating, and only during the Jordanian period in the 1960s did a gleaming appearance in the form of gilded aluminum be restored to the dome. In the early 1990s, the dome was covered with gold. As he wrote to the encircles of the inner dome is made of wood and separated from the outer dome by a space of a meter for insulation. The dome itself is not the original, as it collapsed in an earthquake in the 11th century. The dome was rebuilt. Its decorations (plant medallions in painted plaster - stucco) were renewed in the 14th century.
The structure itself is the original structure as well as the decorations on it. The decorations contain plant motifs and geometric motifs (arabesques) and incorporate inscriptions on three themes:

1. The basic principles of Islam and especially the belief in one God.

2. The special status of the Prophet, the importance of his mission, and its universality.

3. The special status of the prophets before Islam and especially Jesus, and all this to emphasize the supremacy of Islam over religions that had until then ruled Jerusalem.

Under the dome is the drum, decorated with a mosaic depicting plant patterns and a great wealth of different jewelry. The mosaic is made of tiny glass bricks (about half a square meter and below), many of which have a gold coating. Between the mosaics, at the top of the drum, are placed 16 stained glass windows, which scatter golden light on the Foundation stone. Most of the windows are relatively new and date to the 17th,18th, and 19th centuries, and a minority from the 15th century. Under them, in each of the eight walls of the building 7 windows, a total of 56 windows in the full scope of the octagon.

The building is supported by two series of columns arranged in a circle - the inner series of columns that carry the round dome itself, and the outer one that carries the ceiling of the wings of the octagonal building. The dome-bearing columns include 12 rounded marble columns and 4 granite columns. The columns supporting the ceiling are 24 in number, of which 8 are marble columns and 16 colored granite columns.
Above one of the corners of the rock is a coffin with a box inside and two hairs from the Prophet's beard. You can also put your hand through a hole in the closet and touch a recess in the rock that is the footprint of the Prophet as he ascended to heaven. In the Crusader period, this outlet was attributed to the foot of Jesus who argued there with the sellers.

Under the rock, there is a cave to which you descend by 14 steps. This cave was created, according to tradition, while the Prophet ascended to heaven from the rock, who wanted to ascend with him. The angel Gabriel stopped the rock but not before the cave was formed beneath it. According to another tradition here, Muhammad prayed with the ancient prophets, and in the corners of the cave are niche prayers dedicated to them. Among other things, there are niches for Solomon, Elijah, Abraham, and David. On the floor of the cave is a round plate with a blackened star. The place is called the Well of the Winds. There are the dead and there is also the source of water in the world. Some Jews claim that this is the "pissing pit" into which the sacrifice money was drained. The Crusaders used the cave as a place of confession and claimed that the name of the angel informed Zechariah of the impending birth of his son John (the Baptist).

VISIT THE DOME OF THE ROCK IN JERUSALEM 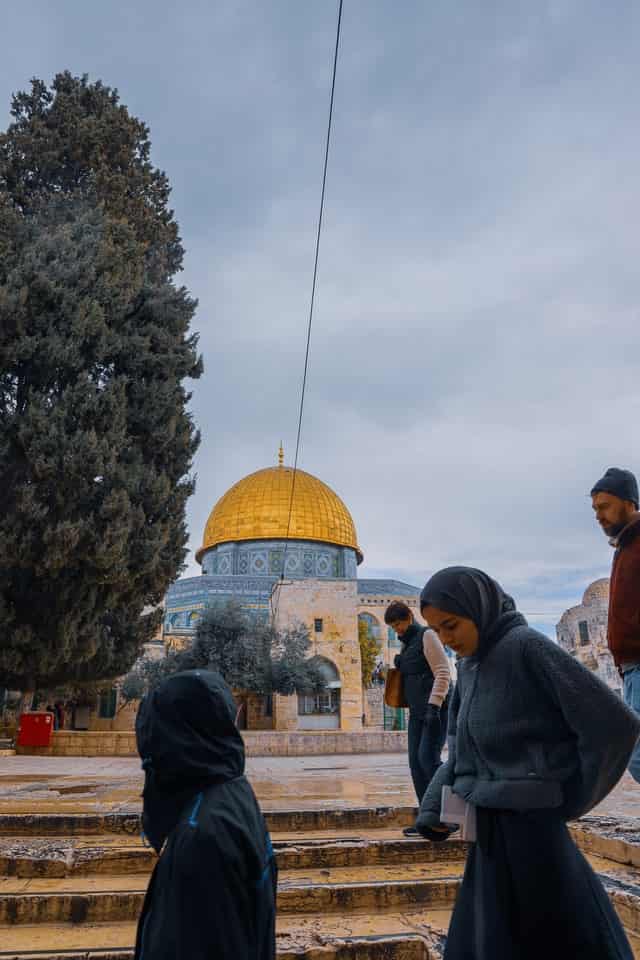 Book your visit to the Temple Mount and the Dome of the Rock, this is a memorable experience that you don't want to miss in Jerusalem. Check my guided tour of Jerusalem and explore this amazing place.