Florentin is an old area of ​​Tel Aviv that has yet to undergo a single large-scale restoration, such as its neighbor Neve Tzedek. Florentin has a very mixed population, traditionally characterized by poverty and transience, although recently the area has become more and more popular, especially among young people. This change is associated with a move away from a wealth perspective towards an alternative culture. Florentin is a symbol of southern Tel Aviv, a fascinating area that contrasts strongly with modern Tel Aviv and is becoming more and more popular for its nightlife.

The lifestyle in the Florentin area is very different from the lifestyle that you can see in most of Tel Aviv. Today Florentin is to a certain extent an industrial zone and an area where people often buy inexpensive clothes and artisans make custom-made furniture. The Levinsky Market in the area is lined with tiny shops that sell specialty Turkish, Greek, and Romanian products and kosher meats, cheeses, spices, and dried fruits. Foreign workers from Asia and Africa gather every morning at Rehov Chlenov in the hope that they will be hired for construction work. Florentin is the technical border between Tel Aviv and Jaffa, no one knows exactly where this border is, but it is believed to be somewhere around Salame street.

Nightlife in the Florentin area

At night, Florentin comes alive, after hard work many residents of the area and the whole of Tel Aviv come here. Tiny bars here sell cheap alcohol, while street vendors offer pizza and falafel. In the evening, Florentin becomes one of the most popular areas of Tel Aviv.

History of the Florentin area 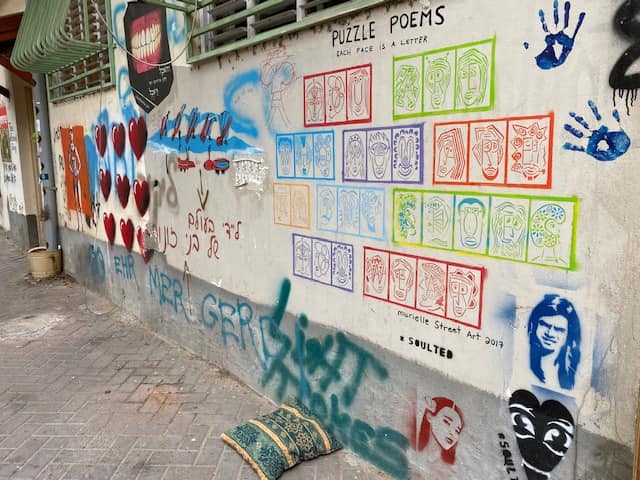 The Florentin area appeared about thirty years before the creation of the State of Israel. The abandoned buildings in the area have become home to many of the country's poorest citizens and many illegal foreign workers. The Tel Aviv municipality first attempted to rebuild Florentin in the 1980s, at the same time as the rebuilding of the White City and Neve Tzedek area began. But the success in restoring Florentine was very small. The revival of the area took place, however, in the late 1990s. This was largely due to the availability of cheap living space in large loft-style buildings. As with many refurbishments in Tel Aviv, the Florentine restoration involved a community of artists and designers who created fashion houses from abandoned buildings.

Since then, Florentin has changed. Bars, restaurants, shops, and other establishments appeared here. Nightclubs and restaurants with live music have opened in abandoned warehouses and basements found throughout the area. This has made Florentin one of the most popular destinations in Tel Aviv for young people and everyone who wants to have fun evenings and nights.

Over 30 years of living in Tel Aviv, I learned to look at things easier. Now I like to plunge into the crowd and rush somewhere in its stream. I arrive at Levinsky Market on Friday at 9:00 am, while there are still not many people here. Dried fruits, spices, something from an Asian shop - unlike the Carmel market, they sell all this "for their people" here, so the quality and prices are much better.

Then you can go to the kiosk on Levinsky 41 and ask them to mix some non-alcoholic cocktails. You never know what exactly they will throw at it. You tell them: "I want something sweet and sour" - they will conjure something.

Tony ve Esther is a hipster café just around the corner. I have never seen such a concentration of non-religious beards! No, I'm lying, I saw it at Barberia's hipster barbershop on Herzl Street. By the way, also nearby ...

Tony ve Esther has great food, but the main thing is the atmosphere. I don’t know why, but it’s very nice to be here. There is something very Tel Aviv about this place, like Port Said or Bucke. 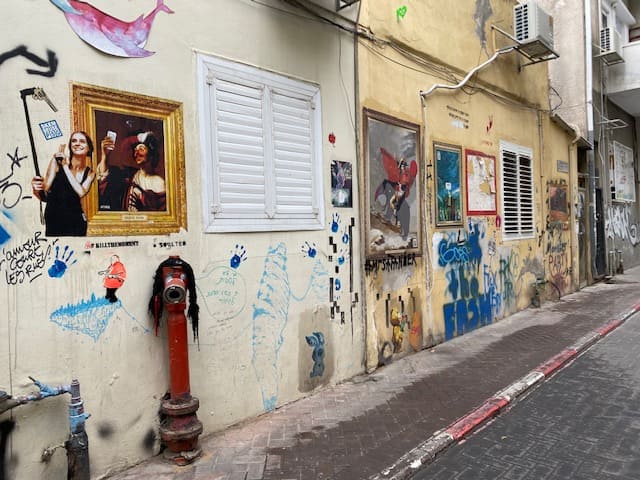 However, all the most interesting is on the street in honor of which this area got its name - Florentin.

David Florentin was the owner of a large Greek construction company. In 1917, as a result of a fire in Thessaloniki, where the majority of the population were Sephardic Jews, 53 thousand people were left homeless. David Florentin was sent to Palestine on a mission to buy a plot of land near the then existing Jewish quarters of Akhuzat Bait and Neve Tzedek.

Florentin became an industrial area, where many carpentry and art workshops still exist. People come here to order furniture, buy paintings or mirrors in massive frames. The walls of the workshops are covered with graffiti for which the area is so famous. They are so good that they have been elevated to the rank of true street art. You can even take a tour to learn about local street artists and the meaning of their work. 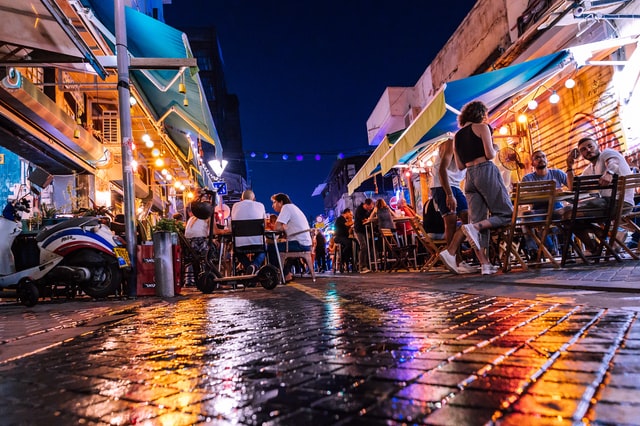 The night is when Florentin (like most of its inhabitants) wakes up! After all, this is a local bohemian island. In the evenings, musicians, artists, rastamen (and adventure-seeking office workers like me) flock here.

These are the guys who opened one of the most famous bars in Florentin, Hoodie. The history of this place is very touching: three poor boys who lived in Florentin somehow came to drink beer in their favorite bar and found that it was closed. However, the guys were not at a loss: they took out a loan for three, made repairs, and the bar came to life again. However, not for long. After about six months, it burned to the ground. Challenge accepted, - thought the stubborn guys and organized a street party, the funds from which went to the restoration of the bar. And they restored it! This bar has been around for 10 years. Florentines still enjoy drinking beer and listening to live music.

After all, Florentin became the king of the nightlife long before Hoodna appeared. The very first bar in the area was the Satchmo Bar. Some 20 years ago in Israel, one could find no more than three of the most standard types of whiskey. Oded, the future owner of Satchmo, was not happy with this. So he decided to open a whiskey-only bar. Oded and his friends organized tours to Europe to the factories for the production of whiskey and brought the best varieties with them. Now in Satchmo, there are more than 60 types of this drink. This is a small, stylish sports bar where John Lennon, Jimi Morrison, Janis Joplin, and, of course, Louis Armstrong, whose nickname became the name of the bar, is worshiped.

He was followed by Lenny's, which was once a restaurant by day and a bar by night. Now it's only open in the evenings, but they can still pamper guests with delicious burgers, sandwiches, and steaks thanks to the large kitchen. Lenny's does not use pre-cooked ingredients - everything is prepared with fresh ingredients in their kitchen immediately after ordering. They also have great deals during happy hour and after midnight, when most of the visitors come to them. Here you can play billiards and watch the main sports matches on a large plasma screen.

Nearby is the Perla Bar, which offers over 20 beers. This is a small bar with pleasant music, dim lights, and most importantly, with a full-wall window, where it is pleasant to sit with a small company.

I go to Shuffle for my favorite vegan burgers and Barbar honey beer. And also to play with friends in the board games that are issued here.

However, my favorite place in Florentina is the Pimpinella bar. An original interior in which all the attention is drawn by the stained glass frame and the magnificent bar reaching up to the high ceiling. This establishment specializes in anise-based drinks (by the word "Pimpinella anisum" is the Latin name for this plant): Araque, ouzo, and sambuca. But the food here is also excellent: lots of fish snacks (carpaccio, fish and chips, herring with potatoes), classic Israeli cauliflower with tahini, artichokes, and much more.

And of course, one cannot fail to mention the two main pizzerias of this area - Giuseppe and Bazilikum. Everyone argues which is better, but I suggest you try both and not ask this stupid question :)

And the last place that I consider it my duty to mention is Beit Romano. The venue for concerts, the seasonal designer market MarketTLV, as well as the hipster Mecca of Teder Bar and the renowned Romano Restaurant.

Florentin is located near the center, and here you can find accommodation at very low prices for Tel Aviv. The best cheap option is Florentine Backpackers Hostel, but here you can also find a very nice apartment on Airbnb for a reasonable price. 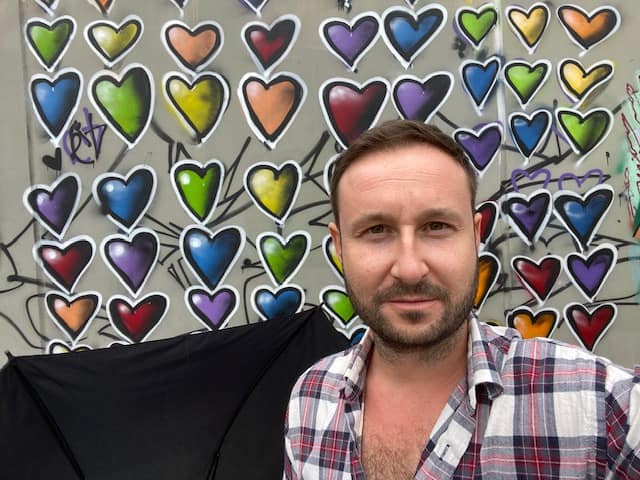 In the tour, we will talk about the differences between graffiti and other types of street art, get to know the leading artists and groups in the field, and get the tools and basic terms to continue to be interested in the fascinating art genre and one of the most popular in our time.

Do you know what the difference is between graffiti and street art? For work on the wall to be considered graffiti - it must be on someone else's territory contrary to his consent. If his permission has been given then it belongs to the street art category.

Sometimes graffiti may be a trivial address aimed at vandalism but most often graffiti paintings are used as a means of expressing an opinion, conveying a message, expressing protest, and marking territory.

The penalty in Israel for anyone who paints, writes, engraves, or draws on the wall is a fine of 500-1000 Shekels and up to a one-year prison sentence. 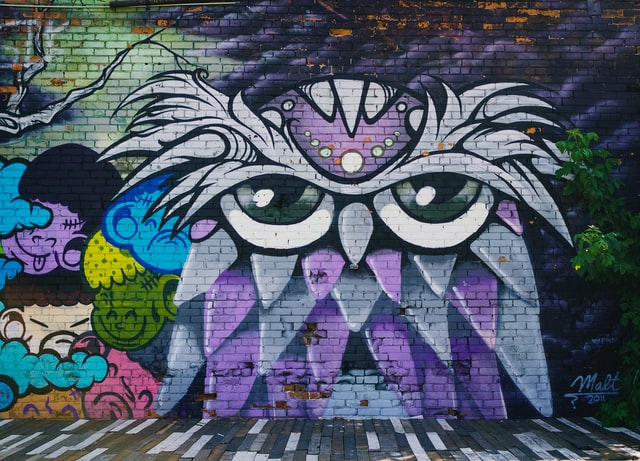 What I like about graffiti tours, they make us take our eyes off the cell phone to not miss the pieces on the walls. Throughout the tour, we will pass by thousands of works such as murals, inscriptions, broken glass, and even some models that were printed with a 3D printer and hung on the walls.

There are some works that it is impossible not to emphasize.

Eyes look at you from the rooftops 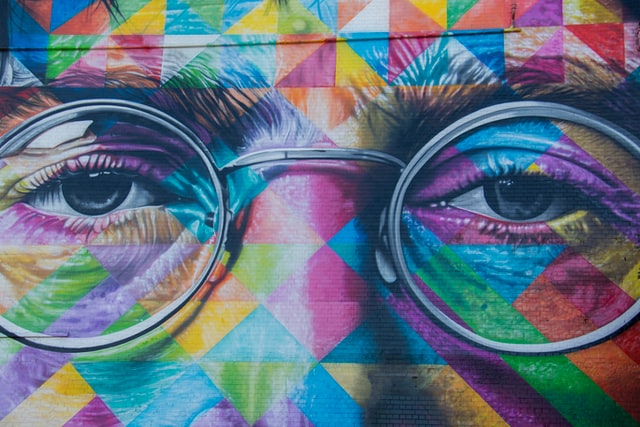 A pair of eye graffiti adorns the walls of many buildings in the Florentine neighborhood, Behind the graffiti, is Alexandra Fishman, one of the owners of a graffiti tour company.

The idea behind the pair of eyes: to say open your eyes, see, look, get out of yourself and your cellphone.

They all looked at us from the edge of tall buildings, a very challenging location to execute the piece. 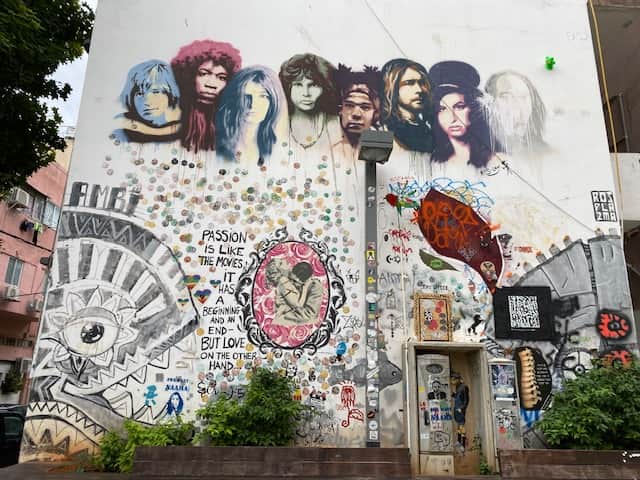 The work is a portrait of artists who passed away at the age of 27, and after them, he also added his portrait - even though he was 28 when he painted the work.

The artists featured in the graffiti are Brian Jones, Jimmy Hendrix, Janice Joplin, Jim Morrison, Jean-Michel Basquiat, Kurt Cobain, and Amy Winehouse. He painted the portraits of famous artists in colors but left his portrait gray.

Pocket-Heart received a lot of criticism for adding his portrait alongside other great artists who did not cross the age of 27.
He claimed he chose to add his portrait because he felt he too was supposed to be walking at 27 due to the depressions he experienced. 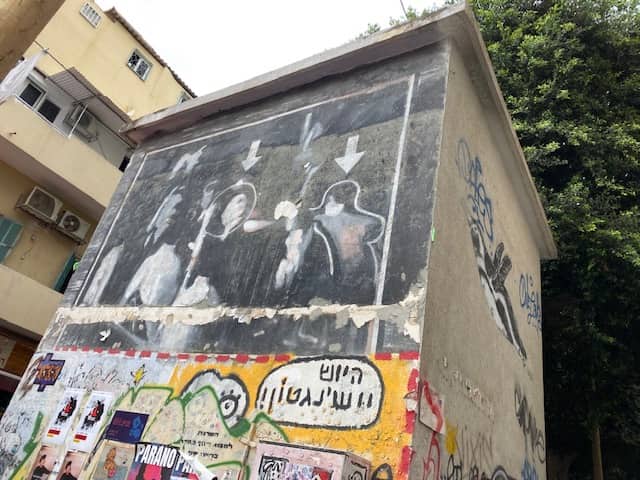 On Washington Street, corner of Florentine, there has been a painting by the artist Yigal Shatim for over 20 years, the painting is a documentation of the assassination of Prime Minister Yitzhak Rabin. The artist decided to paint on the wall on the Street a picture from a video documenting the shooting of the former prime minister so he won't be forgotten.

In 2018, Yigal Shtayim's painting was accidentally deleted by municipal employees, and after the residents' complaints, it was restored.

Are you ready to see the most hype neighborhood of Tel Aviv? Contact me today and book your private tour in Tel Aviv to see the best of Florentine.