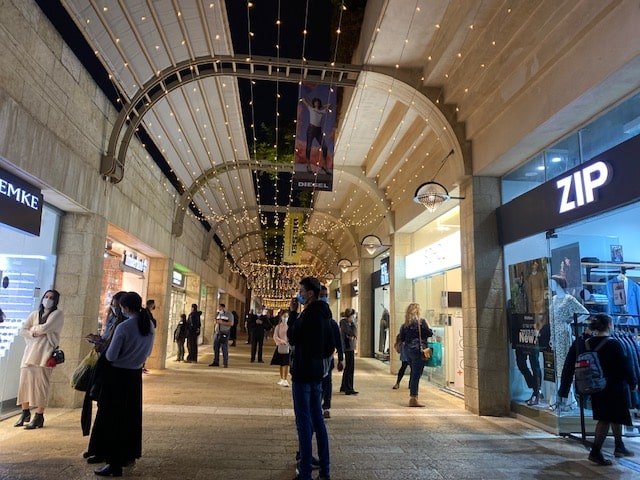 The only open-air mall in West Jerusalem is Mamilla Mall, also known as Alrov Mamilla Avenue, a renowned shopping avenue. The Alerov Mamilla Avenue pedestrian promenade, which is 2,000 feet (610 meters) long and lined with 140 stores, restaurants, and cafes, as well as office space on the upper floors, is part of the mall, which is situated northwest of Jaffa Gate Old city Jerusalem. It is situated above a bus terminal and a multi-story garage that can house 1,600 vehicles and buses(Mamilla Parking). The facades of 19th-century buildings from the original Mamilla Street, the original St. Vincent de Paul Monastery, Stern House, and Clark House, are included in a mall designed by Moshe Safadiya and developed by Tel Aviv-based Alrov Properties and Lodgings Ltd.

The Mamilla mall is a part of the $400 million mixed-use Alrov Mamilla neighborhood, including the David Village luxury condominium project on 28 acres, the David Citadel Hotel, the Alrov Hotel Mamilla, and the Karta parking lot. Although the David Citadel Hotel and the majority of the condominiums were finished in the 1990s, the overall project was approved by the municipality in the early 1970s. Still, the mall has repeatedly been delayed due to bureaucratic issues, litigation, and arbitration. Initially, this was due to opposition from environmental, religious, and conservationist groups. 37 years after the initial proposal, the mall was finally finished and opened in phases between 2007 and 2008.

Several of the most well-known brands in the world are represented in the Mamilla Mall, including:

The Story of Mamilla Mall

A water reservoir at the mall's western end inspired the name. The reservoir, which was solely filled by rain, was known in Arabic as "May min Allah," or "Water from God." The term was eventually abbreviated to "Mamilla," and it also related to the canal that carried water from the source to the Old City.

Mamilla Pond to Jaffa Gate was the original Mamilla Street's length. In the 1800s, wealthy Arabs erected homes, businesses, and shops along this street. The street had developed into a posh shopping district by the end of the 19th century, particularly during the British Mandate. Arab and Jewish businessmen both owned exclusive furniture, textile, tabletop, art, and auto dealerships.

On December 2, 1947, Arab gangs invaded Mamilla Street in response to the United Nations Partition Plan announcement, looted 40 Jewish-owned businesses, and set them on fire. During the 1948 Arab-Israeli War, Jewish traders left the area, which was then heavily bombed. The Jordanian-occupied Old City and Jewish West Jerusalem were separated by the cessation of hostilities until a truce was signed in 1952. Poor Sephardic immigrant families and businesspeople began to occupy abandoned buildings in the 1950s, and the former shops were replaced by workshops and car services.