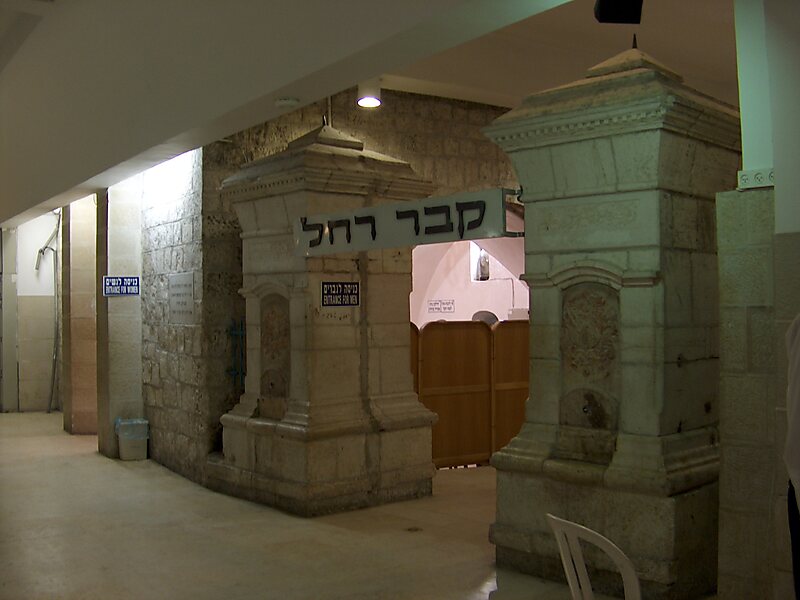 Rachel's Tomb is a tomb structure located in Bethlehem, in which our mother Rachel, one of the nation's four mothers, is buried.

Rachel is a significant mother figure in Jewish history because her life was a symbol of giving up and self-sacrifice for the sake of others and her children. Rachel's life story is moving and empathetic because of her suffering, infertility, and sudden death at a young age due to a complication in a midway birth.

Her tragic death is also the reason she is buried in Bethlehem rather than in the family grave plot in Hebron's Cave of the Patriarchs, where the other fathers and mothers are buried.

Even when foreigners ruled the land, the structure of the historic tomb with the familiar dome was preserved over the years. The tomb had an official guard post during the British Mandate, and even when the area was under Jordanian control, the Muslim residents treated the place with respect, and Muslim women would come to pray there.

There is evidence of Jewish prayer in Rachel's tomb dating back a thousand years. When the Jews were exiled from Jerusalem to Babylon, the road passed through Bethlehem, and the exiles paused to pray and weep over our mother Rachel's grave. The prophet Jeremiah describes Rachel's weeping before God over her people, as well as God's promise that "sons will return to their border" back to the land.

Rachel's Tomb holds emotional and historical significance for Jews in Israel and around the world, and the famous structure can be found in a variety of works of Judaica and Jewish art. Rachel's Tomb remains an Israeli enclave and is open to prayer despite a series of agreements with the Palestinian Authority.

The Midrash (Bereishit Rabbah) refers to our mother Rachel as "the essence of a house," indicating her special role in the construction of the house of Israel. Joseph and Benjamin are brothers. During the First Temple period, her descendants were at the heart of the Kingdom of Israel. Her name appears in several midrashim.

To marry Rachel, our ancestor Jacob worked for her father Laban for seven years, during which time it was said: "and there were in his eyes a few days in his love for her" (Genesis 29). Rachel, to alleviate her sister's despair, gave Leah the signs Jacob had given her to identify herself ahead of time, and Rachel was given to Jacob only after Jacob had completed seven more years of work.

ABOUT OUR MOTHER RACHEL

Our mother, Rachel, was the daughter of Aram's son and Rebecca's brother. When Jacob fled from his brother Esau (see Genesis 27-28), he went to his uncle Laban's house. He first met his cousin Rachel herding her father's flock on the outskirts of the city, where the shepherds waited for a large group of shepherds to gather to roll the large stone that covered the well. But when Jacob saw Rachel, he rolled the huge stone that covered the mouth of the well by himself and watered the flock for his mother's brother.

Jacob moved into and worked in a white house, and in exchange for his work, he asked his daughter Rachel. However, after seven years, Jacob's son cheated on him and married Leah, Rachel's older sister, and Jacob was forced to commit to another seven years of work to win Rachel.

Rachel, Jacob's beloved and beloved wife, did not bear him sons for many years. Rachel's grief grew as more sons were born to Leah, and she slapped Jacob, saying, "Have sons for me, and if there are none, I will die." "The sight of God is vertical, which has kept you from the fruit of the womb?" Jacob retorted. Rachel was only entrusted with the son years later. She named him Joseph - "Joseph the Lord is another son" - to express her desire to have another child.

After many years in a white house, God appeared to Jacob and commanded him to return to the Land of Israel. Rachel and her sister Leah accepted the matter and even justified Jacob seeking to break away from Laban, their father. When Jacob's family left the house, Rachel stole the therapists - photographers Of Laban. Laban followed Jacob and his daughters and when he obtained them he also accused them of stealing the medicines. Jacob - who did not know that Rachel had stolen them - vehemently denied the accusation and added: The reason why Rachel, who became pregnant for the second time, died at the birth of their son Benjamin, while they were on their way - "while the covenant of the land was coming to Ephrata."

Rachel is the only one of the nation's mothers and fathers who are not buried in the Cave of the Patriarchs, and she was buried on Bethlehem Road. Rachel's symbol has evolved into a compassionate mother to her children, Israeli citizens. "The voice of Ramah was heard," the prophet Jeremiah said of her weeping over her exiled sons. Buried - to console the exiles and await their return to Israel.

Rachel's tomb has become a place of prayer for women seeking to conceive over the generations, and it has always expressed the longing and hope for return from exile. The grave is associated with many virtues such as fertility, childbirth, medicine, and protection from all evil.

The tradition of locating Rachel's tomb was not fully accepted during the conditions, but it was strengthened later on. The Ramban, who disagreed with the tradition of identifying the tomb, later regretted it after immigrating to Eretz Yisrael, saying:

The tomb, which stands on the mother of the main road, is also mentioned in Jeremiah's prophecy: "So says the Lord; (Jeremiah 51: 1).

The pilgrimage to Rachel's Tomb is one of the oldest and most well-known. The Jewish explorer Benjamin Metudela described his visit to Rachel Homa-tomb Adam's in 1170: Tombstones."

Visitors and worshipers from all walks of life, including Jews, Muslims, and Christians, continue to flock to the tomb's structure, which has undergone several changes over the years. During the Passover and Lag B'Omer holidays, Jews - women, men, adults, and children - would often walk or ride their bicycles to the grave, where they would sing, dance, pray, and eat.

In October 1827, the English-Jewish philanthropist Moshe Montefiore and his Jewish wife arrived at Rachel's grave while traveling in Eretz Israel. The Jewish lady, who was childless herself, identified strongly with Rachel's character, and during their second visit to Israel in the summer of 1839, she contributed significantly to the renovation of the tomb structure.

The tomb was under Jordanian occupation for nineteen years, between the War of Independence and the Six-Day War, and access to it was denied. The Israeli public was ecstatic when the area was liberated on the second day of the Six-Day War. People from all walks of life, including then-President Zalman Shazar and his wife, flocked to the site. Then, in the words of Shmulik Rosen, singer Arik Lavi sang, "Rai Rachel, Rai; Rai, Ribon Olam; Rai, Rachel, Rai - they returned to their border." Rachel's tomb was and continues to be a very important heritage site of national significance for both religious and non-religious people, and it symbolizes the inextricable link between the people.

Rachel's Tomb is located at 96 Hebron Road in Bethlehem, Jerusalem.

The complex is currently closed to visitors from 22:30 to 24:30 for security reasons.

Saturdays and Israeli holidays are off-limits to visitors.

The compound is open all night on Fridays.

The Zion compound in Arash is closed three hours before Shabbat.

The Zion compound opens an hour after Shabbat on Saturday.

WHAT IS THE BEST WAY TO GET TO RACHEL'S TOMB?

The morning ride, which also takes place on Fridays, goes through the extended Sanhedria.

Call Hotline 8631 * Extension 2 for a complete list of stations.

The trips cost a lot of money and are funded by the Rachel's Tomb Institutions - you can contribute to the bus travel expenses.